I think I forgot yesterday to discuss my knitting, so I’ll start with that. Sadly, the only time I knit while in Barcelona is during the cocktail hour. I make pretty good progress considering how little I actually knit, but in the end, I have to reknit my first sock in Paris because my gauge is different (and better) on my second one. Since my knitting isn’t that interesting, I’ll tell you about the knitting I remember from my first trip to Barcelona. We brought my mother and she lived in Maui then, but I think was getting ready to move. Anyway, she had some linen yarn, and decided to make a pair of socks. I don’t recall her using a pattern except as a guideline for turning the heel and proportion. She hadn’t made any socks since she quit knitting them for my father in the 60s. Completely done based on recollection. So my little 12 rows of Rib on Monday night don’t seem very impressive. I do notice that if you have an uneven number of stitches on each needle you will end with the same stitch that you started with–i.e., if you start the needle with a k1, you will end it with a k1. Conversely, if you have an even number you will end with the opposite stitch so that if you start with a k1 you will end with a p1. I pretty much get through the leg segment (there are only 36 stitches on the needles). Since I’m working garter, I purl even rows. 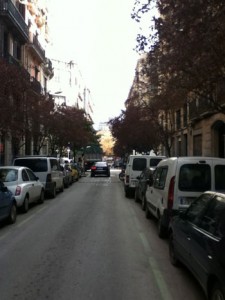 We don’t wake up until 9:45 and don’t get out the door until after 11am. We have to go back again, this time because we ere too optimistic about the weather. With coats on we head toward the Picasso Museum. The ArtTicket Barcelona pass totally pays for itself when we bypass the line and enter on arrival. We have stopped enroute for cafe and croissant. On House Hunters International one night (I think for a place in Spain) the realtor is explaining to the clients that much of life is lived on the streets. I can attest to this. During our coffee I witness what appears to be a father scolding his college-age daughter (she cries and there is a pile of crumpled napkins on the table) and a relationship crisis. We also experienced a relationship crisis on our first dinner out. Since I don’t speak either Spanish or Catalonian, I am only speculating on what was really happening. But I am impressed that people tend to behave just like they were sitting in their dining rooms.

The Picasso Musee is always interesting.  Portrait of an obsessive compulsive/hoarder.  Most of the work there is not that special.  It seems to be preliminary working things out, trial and error, but not that great from the viewer’s point of view.  I think his estate must have gotten an incredible amount of tax credits for all the stuff they had to donate.  Mitch did comment in looking at some pottery that the man knew how to have fun.

After the Musee we have another coffee then do a lot of walking around.  We finally settle down to lunch about 3 pm.  Nice lunch.  Back to our room where we are surprisingly able to siesta again. 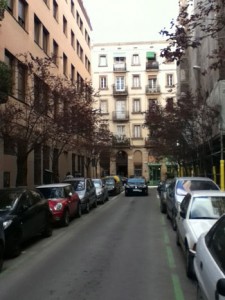 We have a martini before our 9 pm dinner.  I have called the restaurant to make a reservation, but neither end of the conversation had all the needed other language, so there is a great deal of relief when we actually show up.  The restaurant is Osmosis.  Prix Fix with many courses, including an amuse.  Food is all tasty and interesting, but accessible, not game-changing.  Our waiter is a charming man from Brazil who is getting a language workout.  There is another American couple (Indian origins) and an Italian couple in the room we are seated in.  My advice to men:  Don’t take the iPad out of her hands while she is using it (even though, really?  at dinner?).  They Am couple seemed to have little to talk about except over the iPad.  She was a vegetarian so was getting different food than we were.  Bread and olive oil were fabulous.  I ate every bit offered to me, which I never do.  At the end of our meal the chef poured some Spanish port for us.  Delicious.  We leave happy and walk home.