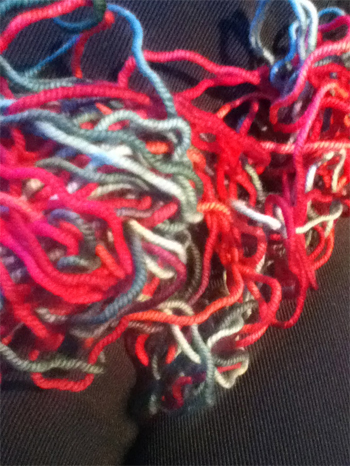 I have been doing projects using short rows to create some new things (stay tuned).  I decided that I would reward myself with knitting a cowl using this concept after TNNA.  This is yarn I got at the Visionary Author‘s retreat in February.  I hate having unused yarn looking at me all the time.

I finally cast on stitches on Monday morning as Wendy and I left Columbus.  I cast on the stitches I had mentally calculated and began my project.  I was tired, but it was perfect car knitting as we drove toward Pittsburgh.  I think I realized I didn’t like the shape I was getting or the needle size I was using about an hour into a three hour drive.  I kept knitting. I didn’t have the energy to root around for a different needle (which I wasn’t sure was near at hand) and I was really enjoying some no-pressure knitting.

When I got to the Pittsburg airport I checked my bag/got boarding pass and then met Wendy’s husband.  We chatted for a bit then I made my way toward the gate.  First, I stopped to call Mitch, and found out my flight was delayed.  Went back to the ticket counter, but they wouldn’t change my ticket, so I went through security (hot, long lines, the usual).  I bought myself a snack and went to the gate to join the hoards waiting on delayed flights.

I do not mind waiting at airports.  I always have lots of things to do.  I got out my laptop and downloaded email that had stacked up since I last checked on Thursday (I know, I can totally not miss it when I travel and I don’t look at Facebook, or Ravelry, etc. either, and it just isn’t normal!).  I answered emails, then read my book.  Since you ask, I am reading Wolf Hall on my Nook.  Eventually we got a plane and boarded about an hour and 20 minutes late.  Since I can’t read on my Nook on the early part of the flight, and I was afraid that we might sit on the runway for a while (I was feeling a little freaked out that I would miss my plane in Los Angeles and not get home Monday as planed) I returned to my knitting.  I knew I needed to pull it out, and had located a needle I thought would be better, so I unraveled my three hours of knitting and returned my cast on to needles.  I started knitting, and when we got in the air, got out my Audible book, 1Q84 which I was nearly finished with.  I thought to take a picture of my knitting about this point. 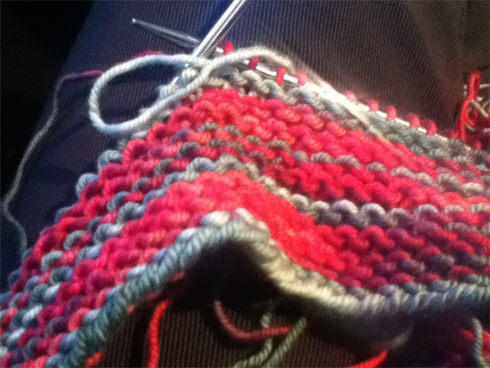 I finished 1Q84 (I think this review is a little overly cranky, but that is why I listened instead of reading it–I while away many hours knitting, ironing, cooking) and started a new Audible book.  I dozed.  I continued in this pattern until I got to LAX.  There I didn’t have to worry about the late arrival as the next plane was boarding 1 hour and 20 minutes late!  I worked on Wolf Hall and wished I wasn’t wearing heels since it was standing room only.  I had been awake since 2 am PDT, and it was now nearly 11 pm (and I was wondering why people were traveling with children at that hour, but I guess it wasn’t that hour when originally scheduled).  On the plane I picked up my knitting again, and fell asleep, and knitted.  I got all the yarn I had pulled out knit up.  We arrived in SF at 1:20 am.  My hope that baggage would arrive quickly was quickly dashed.  I was too tired to read or knit any more.  My cab dropped me at home at 2:30 am.  I brushed my teeth and washed my face and crawled into bed.  I did not know that the alarm would go off at 6 am Tuesday morning.

This from my spouse:  http://tinyurl.com/pds86gw