This April recap of knitting, surgery, and finishing seems an appropriate place to land after the last thirty days.  So much has happened, and not happened!

I couldn’t drink coffee two mornings in a row. Because I am not alert, Mitch planted notes.

I missed putting a blog up on the 23rd as planned. I had surgery instead. Due to the shut down here in Washington state out-patient surgeries are highly curtailed and the surgeries are literally put on the schedule the day before.  I was fortunate to get a call on Monday, April 20 telling me I would be scheduled later in the week, so I began a mad dash to get ready to be out a few days earlier than planned. I was put on the schedule for Thursday. The pre-surgery stuff (planting seeds?, insertion of radioactive tracer, COVID-19 test) had to be fit in too. Fortunately I told the nuclear medicine tech that I was having bi-lateral lumpectomies because the full orders were not in my file. They were able to split the dose and I was on my way to the surgery center with time to wait.

Without the gory details, I ended up with a hematoma that had to be surgically cleaned up on the 24th. I spent a lot of time with ice on the couch.  Most of it dozing or dazed.  I think I now know what it is like to be a cat and be happy to gaze vacantly into space, then sleep, and do more of the same. I chose not to take the narcotics I was prescribed because the pain was not high (ibuprofen and tylenol were all I needed) and so I was able to have a small martini on Saturday. 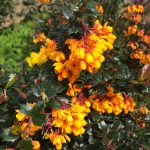 Most of these flowers are yellow. This was so pretty I stopped.

Sleeping on my back isn’t my preference although I can do it. I’m feeling good enough that each night I at least once roll onto my side.  Not comfortable, so back to my back, which is the prescribed position. I do minor PT exercises and walk. Otherwise, reading, minor admin chores, and knitting are all I’ve managed. I’ve been fixing dinners, mostly from things I had already pre-prepped, so it doesn’t take a lot. Mitch has to reach down anything above shoulder height for me. Today I need to make meatballs, but I will likely have Mitch do the kneading.  We’ll see.

I have been doing the JWK Finishing Challenge and it has been such a nice way to stay in touch with a few knitters, and to watch their progress, and my own. My key finishing goals were to 1) clear up the chaos in my office; 2) get all my projects sorted; 3) make 225g of i-cord for String Theory; 4) finish the bodies of two sweaters; 5) get my recipes sorted and filed; 6) block everything needing blocking in my office; 7) make 12 face masks; and 8) plan my calendar for the next three months. 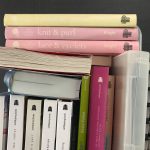 Want my short list of books that will be leaving here? Stitch dictionaries included. 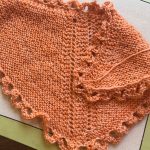 Dolly Shawl. Just garter stitch, and then a fun border that I modified from the original, as well as graduating the size of the loops.

A recap of knitting not recounted above includes making a triangular shawl for Dolly as part of my A System of Grading class. It is super basic, and I had to knit it three times (post surgery) but I think she’ll enjoy it. I had to consult Shawl Geometry by Holly Chayes when I realized my initial thinking hadn’t been for a triangle, but a rectangle.

I finished a swatch I started in Morocco!  We were so sick I had a really difficult time figuring out what I wanted to do with my Giverny idea, but when I pulled it out it turned out I just needed to finish the swatch and I knew how the whole thing would come together.  I knit that swatch about six times traveling around Morocco with a bad cold.

I knitted other swatches too.  Something new in Civility Sport, related to the Somerset Shawl. Can’t wait to get going on it, but since TNNA isn’t happening, it doesn’t need to be front burner right now. I swatched for a fitting shell in Merino Ribbon, then sent the knitting to Handiworks, Ltd. because I don’t have time. I’ve been resurrecting patterns (blame sorting out the chaos) and Judy has been working on short row sock-related projects for me.  I don’t like making socks, but I do like the problems they pose, so it is working out well.

I blocked a project that is related to another Civility Sport project, with a dash of Cashgora Sport.  Another one I would like to work on, but I am not because my brain is too fuzzy. I won’t do the knitting anyway. Judy knit the sample project so I can use it for writing the pattern.

I have a lot of photos that I like this month. Indulge me. 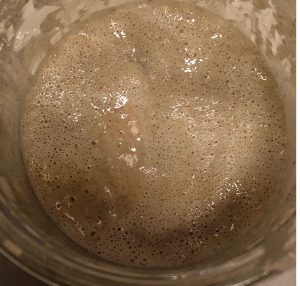 This is a photo of the starter I killed by turning on the oven while it was in there. 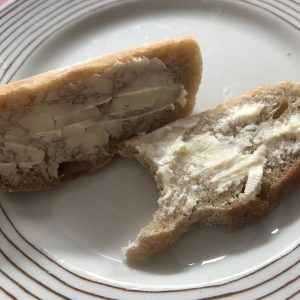 Mitch’ bread was the first thing I wanted after first surgery. I still love my perfect orthodontia bite.

I pictured some child arranging these blossoms. They really appealed to me. 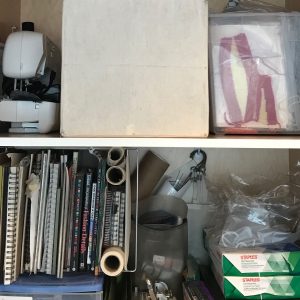 Order from chaos. Part of my storage cabinet. 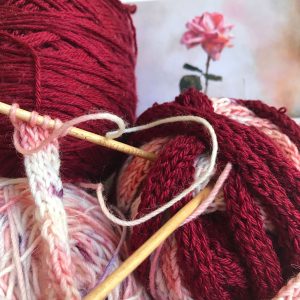 Early on in the i-cord knitting adventure. Nearly to 225g! 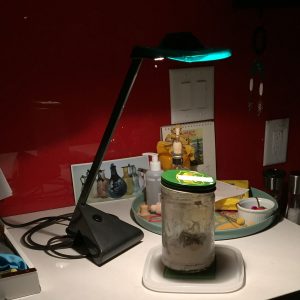 The starter likes it warmer than our house is. Halogen desk lamp to the rescue.