Despite all my admonitions, and the knowledge I have, I still sometimes make the wrong assumptions. Such is the case with last week’s knitting project. I really just wanted to test my calculations, but I didn’t do a gauge swatch. I am reporting this to you because I think it is easy to get cocky. 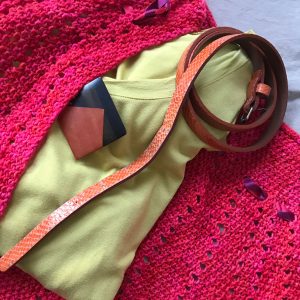 I am working on a pattern I love to make, so I am not particularly concerned about having to redo this knitting, but I feel a little foolish that I sped ahead thinking that I would be okay. I quite honestly had no reason to believe that to be true. I wanted knitting, and I don’t have a lot of yarn that fit the bill for checking this pattern, so I grabbed what I had, and made assumptions about what gauge I would get.

You know the feeling. You think it will be fine because, well, you really want it to be. I went through the inventory of yarns that I had that I could use for this quickie sample, and grabbed what I thought was the best match.  I wasn’t particularly fussy since I needed to check the pattern more than anything, but I was working with From the Mountain DK cashmere, so it wasn’t like I didn’t plan for it to work. I was pleased with the initial results. I loved the way the trim looked when worked with both colors.  I pressed on, and didn’t really notice that it was much too wide, and not nearly long enough, until I was on the second piece!  Then I decided that perhaps I should block the first piece. 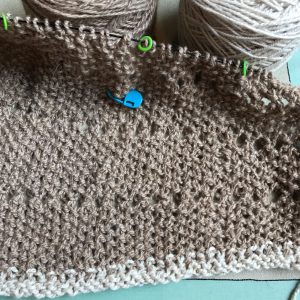 I wet blocked it, and it looked really wide and shallow.  When I measured the width after the piece had dried, it was about 7″ too wide.  This is a piece that is worked from front to center back, so it is going to stretch in width, but needs to be long enough to get around the back and shoulders.  When I thought about it, I really would need it to have more depth than possible with the cast on I had chosen.  The assumption I had made was that my gauge would differ a lot more than it did.  I was using the same needle size I had used on the original piece, and I didn’t expect to get quite the same gauge, but I really way overestimated what the difference would be.  In the end, when I had taken gauge from the blocked piece, my stitch gauge was much closer than I thought, I had used a larger size, and gone too far!

I pinned the blocked piece and counted the stitches I needed to remove and decided that I needed to use a number 16 stitches less than I’d started with.  That width comes off the widest part of the piece, so by narrowing it I will be to the width I want, and be able to add to the depth from front to center back. 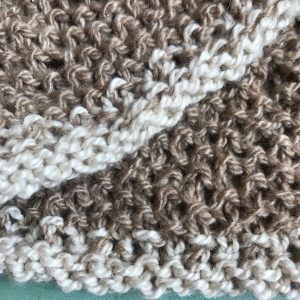 Moving from Wrong to Correct

Last night I re-cast on and worked the front trim and began the segments that make up the piece.  I love to work this piece built with short rows, and the cashmere is divine.  I was not on a deadline. I will chalk the knitting done the first nine days of October as enjoyable.  It was not productive except that it kept me entertained, and reminded me that everyone can be caught up by wrong assumptions.