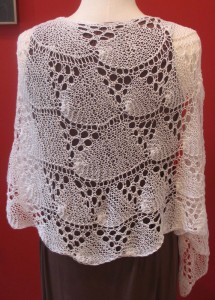 I created this beautiful shawl for the Pearl Yarn from the YarnSisters.  I may be the only person who has knit with this yarn.  I had to knit the shawl on short notice so it could be used in a photoshoot for a special anniversary issue of Vogue Knitting.  I don’t have a lot of time for knitting, so I had to figure out how long it would take to knit so I could make a schedule and finish it in time.  The first row of pattern repeats (18 pattern rows, five repeats across each row) took about an hour, so I figured if I allowed 15 hours more to knit the shawl I’d be in good shape, even if there was some ripping involved.  Fortunately, this is a pattern that is easily memorized.  All tolled I spent about 12.5 hours knitting.  There was some ripping, but I was listening to a great book and was able to get a big chunk of time on a Saturday afternoon. 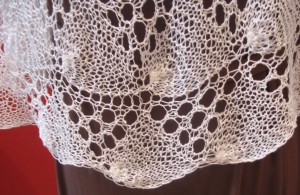 After the shawl was finished and blocked and sent off to NYC, I realized I had only used about 400 yards of the 617 total yards in the skein I had. 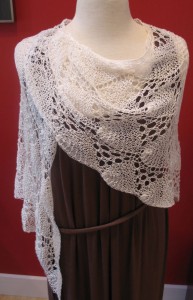 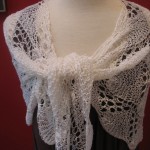 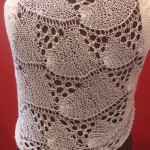 Hence the scarf.  I really liked the stitch pattern I was using (Oyster Shell) so I thought I would make a collar using the pattern with some beads as I had seen lots of lace and beaded collars in the fashion predictions.  I bought several pearl beads types, but ended up choosing the seed beads as the most elegant option.  I strung 220 beads onto the yarn.  Every inch of yarn used after that had to be pulled through the beads.  (You quickly find a system for efficiently doing it, and it gets easier as beads are used up.)  It seemed like the yarn was just not disappearing.  I got through 8 repeats and after blocking what I had completed and hanging it on the dress form, it seemed it was prettier just hanging rather than as a collar.  I worked 9 more repeats, because that would just leave me enough beads to match my bind off to my cast on.  I still had some yarn left, so I made an i-cord trim to stabilize the inside edge and encourage more rippling as the piece hangs.

Quite pleased with the result.  The Shawl and Scarf are both in the pattern.  No pictures yet of the scarf.