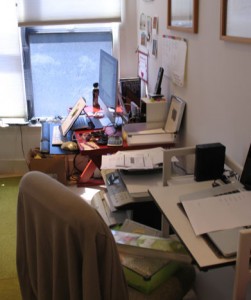 When you fall off the blog wagon it can be really hard to get back on. Because I have limited time under the best of circumstances, when I take on anything “new” something has to give. Sadly, the past couple of weeks it was my blog. I like doing the blog, but when I get into a certain space it is hard to be outward when you are mostly looking inward.

Since last we spoke I have had to replace my desktop computer. Stressful even when it goes fairly smoothly (meaning I only had to pay for one hour of help and I got a small rebate based on a bad interaction). But I’d been wanting to move my office around and that kind of clinched it for me. So I started planning that, but knew that it had to be really well planned or it would create chaos.

Well there is some resulting chaos, but I think it is all to the good. Except I found that there was a lot of stuff that I’ve just put off figuring out what to do with–and I’ve run out of space. I quit using the guest bedroom as my annex and I now have about six small file boxes that I must sort through. There is stuff I would love to just throw out, but sadly, I need to give it some consideration. So now I’m scheduling an hour a day to just sorting the boxes.

During the desktop replacement period Wendy had a death in her extended family which took her away.  She is the anchor of things, so I always miss her even if I can muddle through without her.

Somehow, we ended up with the Goddess Hat Collection all ready to go, so we released that.  I’ve done newsletters about it.  These hats are gauge swatches for the Goddess Pullovers:  Minerva, Helen & Athena, which are also available as single patterns, with their gauge hat, but I though some knitters might just want the hat.  It is in three gauges, and utilizes a triple cable for the band, and the eyelet pattern for the body.  I’ve finished it off with a neat segmented closure which can be done decoratively in contrasting yarn should you like a little extra snap to you hat.  These are great gifts, and are also gauge swatches if you use the same yarn for the pullover as the hat.  If you are feeling conflicted, we’ll be releasing a 12-pattern collection in early October which will contain the hats, pullovers, cuffs and neck rings (cowls) in all three gauges.  Priced at $49 the collection is a nice value.  You can email us and we’ll put you on the list to be notified it is being released.

Which means I need to get back to my desk.  Those patterns will not be completed by the end of the month if I don’t get to them!