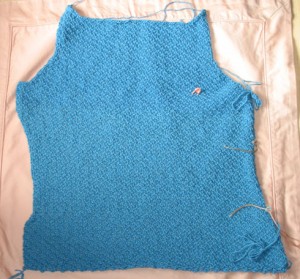 The back of Blue Canoe is finished. It needs blocking to square it up (remember what I said about biasing?), and I need to write up how I changed the back to make it more bra friendly. But the knitting on the back of mine is done. So now I need to decide whether I cast on the neckband, or the front. I think I will get both on needles this weekend, then I can have a carrying-around project and an at-home project. 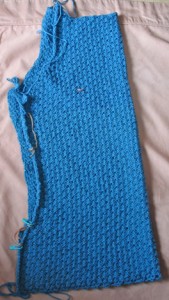 I also finished my super-simple short row project yesterday. We had my mom over for Fourth of July hot dogs, and while she and I sat talking I finished up my project. I could have used a few more yards of yarn, but this was a one-skein project and that’s all I had. I had been annoyed the entire time I was working on it because I had a long tail left from my cast on, but you never know, so I hadn’t cut it off. I ran out of yarn four stitches short of completing the bind off, so I just used my tail. I still have ends to work in (and now I have extras due to having to join new yarn to bind off). My mom asked how I was going to finish it and all I could offer was that it would have to be something not needing any yarn.  I think this project is a prototype.  I’m not sure I got everything right on this one, but it was a great knit, and I’ll get more yarn and have another go at it.  In the meantime, I have another idea for an iteration of this.

But I also need to cast on the beret prototype for Mom.  She loved the yarn, but was relieved that she didn’t have to knit it.  She is always working on her last project, but as she passes her 90th year, it is looking more likely that she’s getting there.