I’ve written lots of words on the Obstacles in Knitting road to get to Charts Match Written! All the things I’ve written about were on the initial list of notes I made when I decided to do this, but I think charts match written was the trigger.

So, don’t get me wrong. These are a fabulous resource. But I have a bone to pick with how Ms. Walker deals with extra stitches in written stitch patterns–not because they are wrong, but because they have bred bad habits in those who use the stitch patterns. No other resource does it differently, so I use Ms. Walker’s work as an example, from the best.

When there are no extra stitches, the pattern is written like this:

When there are extra stitches in a stitch pattern, they might appear at either or both ends of the repeat. the pattern might appear like this:

My problem is that if I put markers in on Row 1, to separate the extra stitches from the repeat, when I work Row 2, the extra stitches are not in the same place, and hence my markers aren’t helping me at all. Let’s look at the examples.

So this puts my brain into a knot. In the particular pattern I used for Example B, there are 10 rows. None of the RS rows match the WS rows. 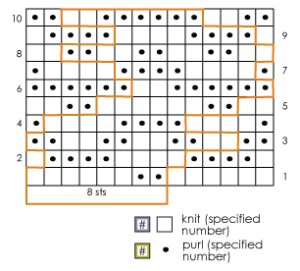 The orange box shows how the stitch repeat lines up as you move from row to row. Note: the chart to the left is an action chart. It is the same orange box if you use an appearance chart (I made this one in StitchMaps.com.) 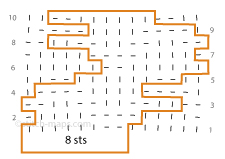 The charts above shows there really isn’t a row to row repeat. But in a grid, it is easy to see how the row-to-row repeat can be rewritten to make it easy to work within markers.  Here’s a chart, with an equal number of extra stitches on either side of the repeat. 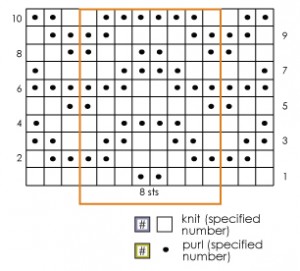 Even if you don’t want to work from a chart, the pattern can now easily be rewritten so that if you put in markers so there are 3 stitches on either side of the repeat(s), the extra stitches are the same every row. The orange box can be moved anywhere horizontally and this will still be the case. Note: the chart to the left is an action chart. 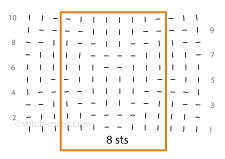 See how much better that is when charts match written! If you prefer an appearance chart, here’s one I created using StitchMaps.com. Even if you aren’t providing charts, I believe that having the repeats line up provides the opportunity for the knitter to use markers in a meaningful way. I do not see why the other way is preferable; saving a little written space should not be the driving factor in providing useful and useable stitch patterns to knitters.