I think there was no other color that would have done the job for 2020 Color of the Year other than Classic Blue.  It had to be Classic Blue. Not a personal favorite, but sometimes we need what is familiar, stabilizing, straight-forward, and classic. 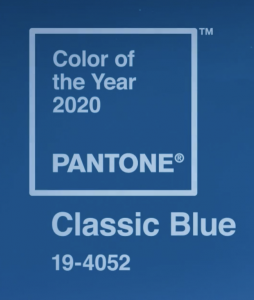 It Had to Be You

Instilling calm, confidence, and connection, this enduring blue hue highlights our desire for a dependable and stable foundation on which to build as we cross the threshold into a new era.

Before I had read the Pantone blurbs, I knew it had to be Classic Blue because our world is just too much right now. The Daily Show with Trevor Noah has a segment it does called We Ain’t Got Time  For That . . .  For many of us, that is what our days and weeks feel. Blue signifies water, and sky, and calm.  We need calm!

Whatever, It Had to Be You

Did you know that blue is the universally most popular color, particularly among men?  I should amend that to white men, since I do not know whether they asked a real cross section.  For years all red lipsticks leaned toward blue undertones because it made men happiest.

Impeachment: The last impeachment involved a blue dress, so it had to be blue.

Stress:  Crazy commutes, stagnant wages, polarized politics, climate emergency, roll-backs of protections and regulations, unprecedented wage and income disparities, world order shake-ups. I could go on, but this is why it had to be blue. Few of us are enjoying life the way we’d like to right now.

The song is running through my head.  It has been done by many artists: Frank Sinatra, Tony Bennett, Harry Connick, Jr., and many others. I can only ever remember snippets of the song, but it is part of the American Songbook and was published in 1924. It has also been a movie, and books.