The structure of an eyelet pattern can make it a more complicated eyelet than it seems in working it or looking at it. Once shaping begins, it is clear that keeping it looking good while shaping was harder than it I thought. 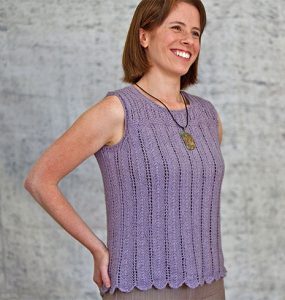 I got an email from my sample knitter with a problem. Her photo showed it immediately. When writing the pattern I wanted to make the pattern more “efficient”. I had left the shaping in the Eyelet pattern up to the knitter. It is what most designers do, and it seemed like I might be able able to get away with it in that design. This isn’t really a complicated eyelet—until you get to the shaping!

I prefer to have my patterns clear enough that I don’t get operational questions from knitters I am paying, or knitters who have purchased my patterns. To do that  my patterns tend to have lots of words and charts. I had decided that this wasn’t a complicated eyelet and would be easy enough that I would just try not spelling out the row-by-row execution and let the knitter do it on the needles. This ended up looking less elegant than I like, and my sample knitter asked me to take a look at it. Her enthusiasm when I said I’d make charts for her tells me that although no one wants to pay for me to make those charts, a good method isn’t always that apparent.

Here’s why there end up being problems with shaping on the needles, without guidance.  This is a 12-stitch pattern which isn’t quite balanced. The pattern itself isn’t a complicated eyelet, but once the shaping starts, it does get complicated!

What happens to the pattern when shaping at one end of the row isn’t the same as what happens at the other end.  There are other things that make it problematic, not the least of which is that the body was worked in one piece until it was divided at the armholes. Then it presented a cascade of things that needed to be sorted out. The Left Back was the first piece worked above the armhole, and it was fairly easy to shape because the pattern was well established.

Next up is the Front. The armholes were bound off before the Left Back was worked. When working the pattern not only is the first thing encountered a decrease, in pattern, then working across the row, and decreasing at the other end, but you have to figure out where in the pattern the knitting is.  Also, it calls for a double decrease, and then a single decrease.  After the armhole decreases a new eyelet pattern is established, and the Front is divided for the neck.

So I sat down with graph paper to figure it out. But what seemed logical, wasn’t elegant and I ended up having to tweak the way the eyelets occurred to avoid having a large expanse of stockinette I didn’t want.

This is what goes into my patterns. I added six charts for the Fronts, just for the Medium and this is not a complicated eyelet. That means I’ll end up with 30 front charts. Those charts took about four hours to sort out and build. The others will likely go faster, but it is still quite an investment of time. Sometimes I can just put in a blank chart and have the knitter chart out their shaping, but since I took liberties with the pattern, I don’t think that will work. It also means that the pattern went from about 12 pages to 20, and I haven’t put in anything but these six charts and the written instructions that match.

The biggest obstacle to knitters finishing a project occurs when they run into a problem they don’t have a solution for—or that they need to spend time figuring out. So a knitter could figure this out, but is that the best way to get to a completed project?