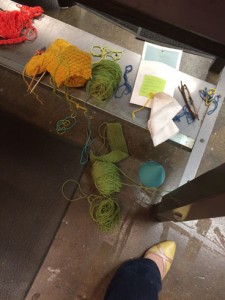 It is no accident that Craftsy creates classes that knitters want to take. Make no mistake, everyone working on creating/delivering a class knows what works, and how to make it happen. Like any “startup” they are constantly modifying processes as they learn more. But they pay a lot of attention and so get it right. This is the list of people at Craftsy with whom I had some contact and made my class possible. 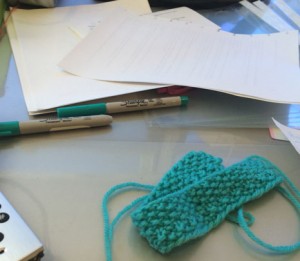 Of course there were other people involved, this is just those I was aware of. Sadly, I forgot to take pictures of anyone–I assume everyone hates having their picture taken as much as I do, so I don’t do it. 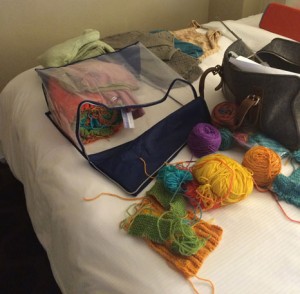 I had to get up sooooo early to catch a plane that would get me to Denver in time for an 11:30 appointment. Craftsy has a car pick you up, so grabbing your bag and getting out to the car is all you have to do. I am taken directly to the hotel where I am checked in and go to my room. My meeting is moved to 1 pm (they are trying to wrap up things being taped the first half of the week) which gives me time to settle in. Not only does Craftsy leave a care package for you at the hotel, it contains helpful hints for dealing with altitude and taking care of yourself for shooting a video class. I took their advice and got myself settled in. Whenever I’m in a hotel with an unused bed, it becomes a staging area!

On arrival at Taxi, where the Craftsy studios are located, I meet with Maria and Tommy (and a Switcher [a Switcher tracks cameras, where you were when something happens, as well as uploading files, with all their notes, for editing] whose name escapes me) and we talk through doing a video and did a little practicing. This pretty much gets me over my nerves and jitters. I am reminded to be my best and most engaging self when in front of the camera. I am given a complete tour of the facilities–again, to make me comfortable. Then I am released and Ubered back to the hotel. I take a long walk and get some lunch and figure out where I am meeting Jim and Larry for dinner later on. I go back to the hotel and make notes on the shooting script and work on finalizing swatches. You seriously feel that you could not do enough to prep for this, which makes it possible that you will be prepared when the camera is pointed at you. 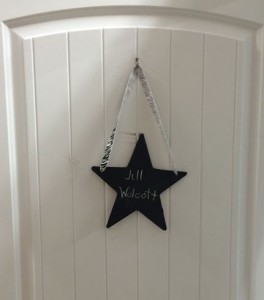 I am fortunate that I know two couples in Denver, and I have dinner with each them while in Denver. This is a nice distraction and the perfect way to keep calm before starting taping and to unwind after taping starts. I was very good and never drank more than two glasses of wine! Denver is a nice city that is experiencing a rebirth that is fun. For me that means good food and lots of restaurants! The last two nights I go out by myself. This is actually nice after talking all day.

I was incredibly fortunate in the producer I was assigned to. Evan and I got each other from the outset. He made me comfortable and encouraged me as needed. I felt he was going to make me look great, and that I just needed to do my part and I could leave the production to him. Although it seemed that camera and switchers are just assigned to a shoot, maybe Evan requested them. I don’t know, but Tony and Laffery were awesome. They were fun and encouraging, and also completely disappeared from my awareness while we were taping. Laffery was practically standing on my left shoulder, but I never felt watched or uncomfortable–I completely forgot he was there and was always a little surprised when we cut and I realized he was there. Tony could always find the best place to go back to when I flubbed or something had to be redone. Tony was skilled at making noises, as well as being funny, and everyone had a wonderful sense of humor and worked to make it comfortable and fun in the studio. Laffery keeps us laughing with his use of the Slate. Thankfully we didn’t have to do too many takes for most things. 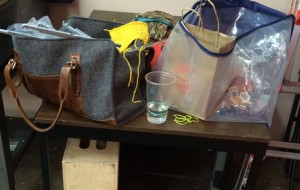 Even if there are no retakes, it takes a lot longer than the length of a segment to get a 20-minute segment taped. There is set up, talking through the steps, troubleshooting, pus things were discussed that I had no idea what they were talking about. Then there is the uploading, static shots, again, more stuff I had no idea about. So we were in the studio for 2.5 days. But there are breaks. Lots of food is around, and always beverages. We went out to lunch on the last day although we were all anxious to wrap up and afraid to relax much. 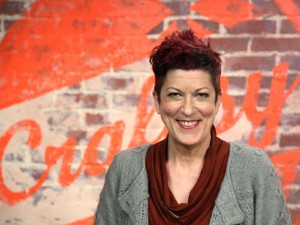 It is exhausting and exhilarating to tape a class. I now understand why film/television/radio people are so well cared for. Teaching to a camera is different from teaching to a class. There is no attentive student to encourage you or to laugh at your jokes. So it takes a fair amount of energy and focus. You are thinking and reacting the whole time, plus trying to be your most engaging self. Evan thoughtfully put a graphic of a martini glass on the “A” camera to remind me to be engaging.

Wrapping Up a Craftsy Knitting Class

This is really long, so I’m going post this part on Thursday. 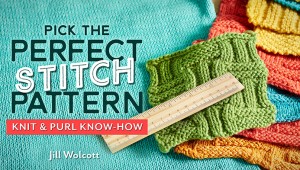 Check out my Calendar/Events/Schedule page! We’ve got a calendar up and I’m starting to populate it. Steps. As long as we are moving forward that is good!