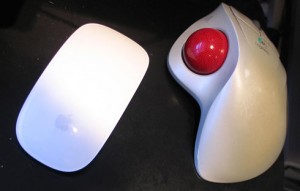 The computer kind. Jill Wolcott Knits World Headquarters has not been taken over by real mice. But our second computer mouse just died! The one on the laptop died (external, trackball) two Fridays back. I kept forgetting to get a new one since I don’t usually use the laptop and Linda only comes in twice a week. Today she reminded me and I got on the computer and ordered it.

About two hours later I was on a conference call and had been madly replacing my battery for about an hour when, after about a dozen replacements, it just. Died. I couldn’t figure out how to get the backup, backup mouse to work (the white one on the left; turns out there was a little switch on the bottom) so I had to run downstairs and use Mitch’s computer. Which meant that I could’t cheat and do other things on my computer while on the call. I survived.

This is what I really wanted to post today.  Kind of a victory lap on this project.  Point Roberts, the outside-in scarf.  Here are some pictures.  We put beads in the corners which I think look great, but also provide some practical options for anchoring.

As I got closer to the center of this it became clear that in moss stitch I needed to do my decreases every other row.  That was really nice because it meant it started to really, really come together.  I loved the change in texture the moss stitch gave it, and I most absolutely love the flat 3-needle bind off in the center.  It is only an inch long, but I think it gives just the right finish. 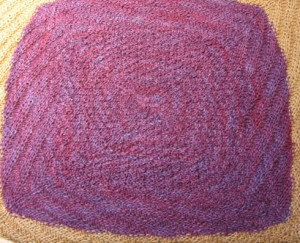 Linda worked in the ends for me and added the felt balls based on a little sketch I did for her.  I folded the scarf a few different ways and took pictures, but most of them need to be redone.  This is what I have that are good enough to post and won’t make you think you are having vision issues.

I also took a photo of what was left from my original plan.  I have a few other felt balls that didn’t get used, but the yarn you see is all that is left from two hanks.  No one can accuse me of squandering yarn! 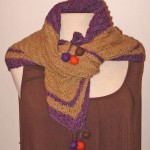 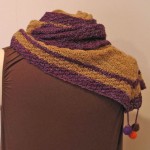 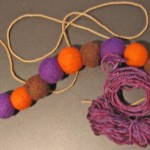