The typical knitter wants a brief pattern that reveals all the details they need to know in a clear and concise manner. Sounds good, but it isn’t what we can deliver in the current knitting pattern format.

I’ve gotten some specific questions to previous posts in this series, which I’ll try to address.

Details: Why There Should Be More

The short answer to this is that there should be details sufficient for the knitter to reasonably produce a facsimile of the project. What we currently give knitters is often not enough–despite our best efforts and intentions. On the flip side, some knitters don’t need a lot of instruction or detail and are probably fine with patterns as they currently are. 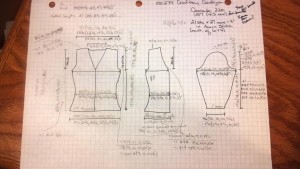 Much of what we do in knitting is based on how knitting was undertaken, learned, and shared in the past. You may have noticed that things aren’t really like they used to be–or if you are younger, that your experience is completely different than that of previous generations. 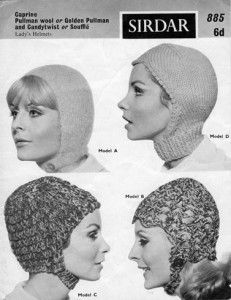 Today’s knitters most often did not learn to knit as children and grow with their hobby/vocation as they moved through the years. More likely, at some point they decided to learn to knit, or return to knitting, and they came into it as if by helicopter. They just swooped in, picked it up, started learning, and experiencing. Most knitters do not also sew or have a background in making clothing or other project. So the amount of detail needed today is actually quite different than it may have been in the past. Additionally, we are often doing knitting in completely different environments today, which may impact both the level of information we need and the way we want to receive it. Always, one can skip material that isn’t needed, but it takes much more effort to find information that you might need.

Details: Why There Isn’t More 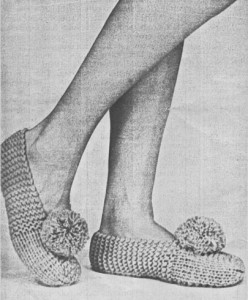 This was my first knitting project. HATED it. Hated knitting!

As I alluded to above, needle crafts were often part of what most girls learned growing up. Without debating the pros and cons of this, it was a fact. I learned to sew when I was eight or nine. I learned to do basic cooking, and because it was considered appropriate at the time, was made to learn embroidery and cross-stitch too. This taught me not only the basics of each of those skills, but how to read and follow directions, how to follow a recipe as well as a variety of associated skills. I also learned about fibers, textiles, and their care, and how to finish things I didn’t want to finish. As a bonus, I learned fractions, eating cookie dough, measurements, using scissors, and a bunch of other associated things. 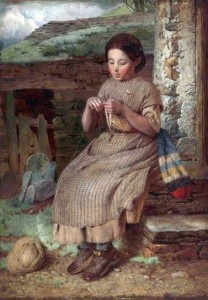 Before my time, this knowledge was mostly passed on orally or through copying of instructions. But instructions assumed levels of knowledge appropriate to the times. Today practitioners may have little of that previously assumed knowledge. They do have the internet, so access to information is increased, but we may be presuming a basic knowledge level that is no longer realistic. Back in the 70s/80s Elle Magazine used to have knitting patterns–printed on an index card!

Another reason detail isn’t provided is that traditionally patterns were provided by publishers who had to work within space constraints (cost!). As those constraints became more stringent the detail provided got truncated. At the same time, the ability to provide information was actually increasing. But the end user wasn’t really paying for the patterns; advertising subsidizes much of what was and is offered, and in most cases, the advertisers were not selling patterns, they were selling yarn and tools. Another source of knitting patterns was yarn companies, whose focus was selling yarn.

As self-publishing became possible and more designers presented their own patterns, the matter of cost became even more of a factor.

Details that are Really Important

I’ve discussed a lost of these: schematics, charts, shaping charts and/or written instructions, written instructions or guidelines, technique explanations, stitch patterns in written and/or chart form, intentions or a road map to follow, in addition to all the usual information about what you need to make the piece. Given a list, the importance, we might each put them in a different order.

A few things have been brought to my attention that I think are important, even if I’m not currently providing them:

I include selvedge stitches wherever there is a seam or stitches to be picked up. But I realize I do not say anything in my patterns. A knitter would have to read the finishing instructions to know that there are selvedge stitches. I always say what type of seam to use, but again, I am not probably being specific enough hat I have included these stitches, and that I have placed my increases and decreases in relationship to that selvedge stitch.  I have a downloadable document on my website that gives an overview of what to expect in my patterns.

How and Where To Pick Up Stitches

I am very specific about where to pick up stitches, and my techniques database has several versions of picking up stitches explained. This is probably one of the most confusing things to knitters, because the term is used in a variety of ways, none of which are what a beginning knitter thinks it is! Mostly we mean to “pick up as to knit” so that yarn is used to create new loops.

PU stitches: between edge and next st

PU in e-wrap cast on

This doesn’t count all the time I reference picking up within the context of other knitting maneuvers!

I’ve been very remiss on this one. I know people in Europe, Britain, Canada, New Zealand, Australia, like my designs, but I’ve just never taken this on. This is because a) it is a lot of work, and b) I’m worried about adding yet more into my patterns. I now have a good idea on how to do it, but it is still a lot of work. I’m not sure my excuses are good ones. 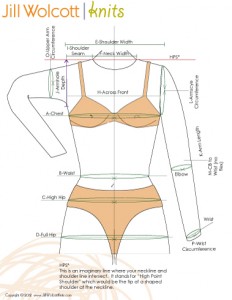 I see a lot of people searching for sizing guidelines on my website. They are here. There is a downloadable document with the sizing tables I use as well as two croquis showing where those measurements are taken on the body. I think I do this really well; I teach other designers how to use ease and sizing guidelines in developing measurements that suit their customers. I don’t use the Craft Yarn Council measurements in my own patterns because I do not think they give realistic body measurements. They are used by most magazines and many yarn companies.

I don’t think I have room to tackle this one here. It is too important, so it will get a separate post next Tuesday!