I’ve been working on a Eventide, a sweater designed by Holli Yeoh (I’m making a half-size version). The pattern shows up as a horizontal zig-zag pattern, but it is executed similarly to the pattern that is used in Silver Valley, which creates a look of vertical columns. The nice thing is that they are both 12-stitch pattern repeats, which have a pattern row and an even row, and that’s it.  That something so simple can create these patterns is kind of amazing. Knowing what is happening when you do them will help you in understanding your knitting more deeply.  Let’s look at what actually happens.

Distort Fabric In a Good Way

One of my favorite things about lace is how it scallops the bottom edges, and within the lace pattern the stitches can appear to go one way or another. Do you know whether it is a decrease or an increase that is pushing the fabric down? Or up?  I like to know these things to help me understand my knitting.  The short answer is that the downward movement is created by the decrease which seems counter-intuitive.  The upward movement is from increasing.  How these are placed relative to each other, and what other stitches are involved will change the result. 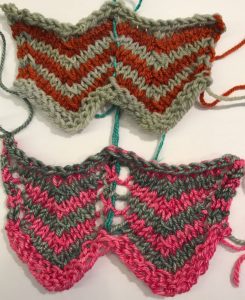 There will be less distortion with a single decrease than with a double decrease.  The tension placed on the pattern and adjoining stitches is increased when there are two stitches decreased across three stitches.  The most common double decrease is the SK2P: slip, k2tog, pass slip over.

Let’s look at what a k2tog does:  It joins two stitches together into a single stitch.  This causes one of the stitches—in a k2tog it is the left stitch that is brought over to, and will lay on top of, the right stitch.  If you think about it, that makes complete sense, because the right stitch is the stitch that would be worked, and so it goes directly upward into the new stitch created by the k2tog.  So the k2tog is slightly pulling the fabric toward the right (and it is called a right-leaning decrease because the left stitch is moved and leans to the right!).  The stitch that is slipped, is then brought over the new stitch (which is upright) so that the slip stitch is leaning in the opposite direction (left), over the new upright stitch, so the fabric is also pulled from the right. That slight pulling from each direction pushes the fabric downward. 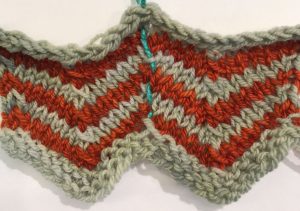 In the Eventide pattern, which creates a zig-zag pattern, the increases are lifted from a central stitch.  First a left-leaning lifted increase is worked, then a twisted (k1-b) central stitch, followed by a right-leaning lifted increase.  Holli and I use slightly different terminology, but her LRI is the same as my incL and her RRI is my incR. A lifted increase causes less distortion that some increases, but there is always some.  The incL/LRI puts the stitch into the top of the stitch below the stitch just worked. The incR/RRI works into the top of the stitch below the next stitch to be worked.  It seems like that would be unbalanced, but it actually means the completed increases are both in the row below the stitches worked on the increase row. The end result of this pulling is to cause upward movement of the fabric. 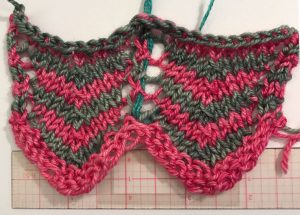 In the Silver Valley pattern, 12-stitch Razor from A Treasury of Knitting Patterns, the increases are done as YO and have a slightly different effect.  What does a YO do?  It adds a stitch by putting a loop of fabric around the needle. The YO is not anchored into the stitch below like a lifted or other increase worked into an adjacent or adjoining stitch, so there is not the same tension on the fabric. causing less fabric distortion, instead creating an eyelet or openness in the fabric. You can see that the flexibility of the YO actually allows for the fabric to distort more! 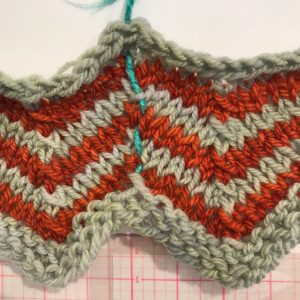 In Silver Valley the same thing is happening with the decreases, but a column of YO, k1, YO is created by the increases.  When worked in color changes like Eventide it would also cause the movement of color.

On first row of Eventide, place amarker between the two repeats. 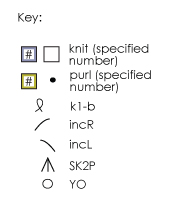 On first row of Silver Valley, place a marker between the two repeats.

Notice how I did the bind off differently on the two pattern repeats in each pattern.  The right side is just a regular bind off, worked loosely.  The left side I alternated JSSBO and a BO to get a semi-flexible edge.  It turned out it did make a difference.  Work this out yourself and see how it works.

The following photo is how I handled the mini-skeins I was working from.  These are the Luster skeins.  You can see a slight difference in the way the unnamed yarn, which is 100% wool, and the super wash merino/silk blend behave. 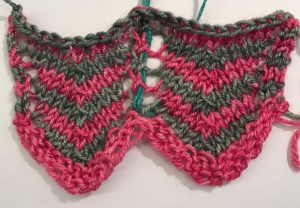 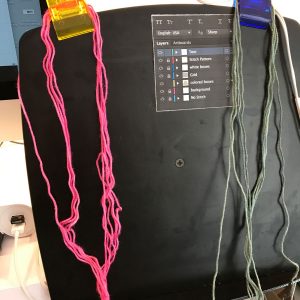