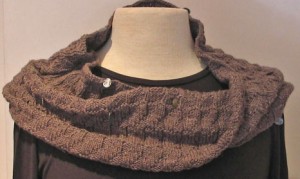 I knit the first Esperance Cowl sample (Civility SockTwist in City Shadow). I am not usually a good sample knitter because I don’t notice if I’ve made any errors in my pattern-writing logic. So I had the second sample made by a knitter in Civility Sport. First I gave her the wrong number of buttons, and then she realized as she got started that there needed to be a setup row (that I had done in my sample, but failed to write down). I’d made a couple of misstatements about the moebius cast on too, which were fixed. Once we got past those things there were no other issues until she came to figuring out how many yards of yarn to leave to work the bind off–without have too much extra. She ended up with about three yards left! 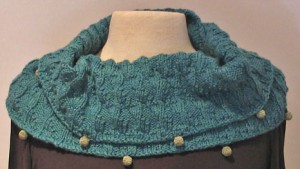 So I’ve been really looking forward to making another version. I started it on the plane trip to Seattle, but I was using an interchangeable needle with a connecting piece, and I couldn’t get past the cast on because as I worked the first row, the cast on loops kept getting tighter and tighter and eventually I couldn’t get them over the connector. I tried again–twice. No success. Eventually I borrowed a needle with a long enough cable so I could get past the first row. and it worked beautifully. Somehow my buttons weren’t spaced correctly, but I pressed on because it was all I had to work on. Worked it for about 10″ (which is really 5″). It seemed kind of smaller than I expected it to be too. I did a color change and didn’t like it, so I found another skein of yarn and decided to try that color instead. That meant I had to take it off the needles. 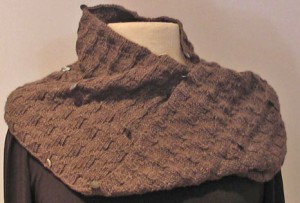 I heard an “oh no!” from Mitch as I worked the needles out. Instead of unfolding into the large-ish cowl I wanted, it was actually smaller than the previous one I’d made.  Hmm. I needed to give this some thought–or rather, count my stitches. It turned out I had half the number of stitches I meant to have so I had miscounted when I cast on. 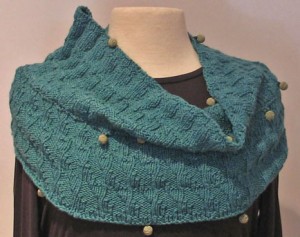 I am going to start again. It is a pain to undo a moebius because of the twist, so I’m going to start knitting from the other end of my ball (I have the beads strung for the bind off). Then when I feel like I’m making progress I’ll take out the other one.

I finished my Belon shawl on Thursday at about 9:45 pm. It took longer than I had planned, in large part because I found it very difficult to get any real speed going with cobweb weight yarn. I love it though and it took about 480 yards of yarn so weighs about 48g (photos to come).

Here I am dressed to go to the fancy dinner Friday (2/27). This shawl never had to be adjusted–through cocktails and dinner and I loved how it kept me warm without even feeling like it was there.