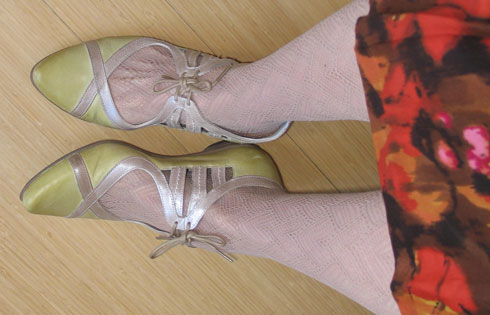 Thursday is the new week for classes for me this quarter.  I’ve done an hour Pilates class this morning, and I have the fab new shoes to wear, so I am really anticipating a great day!

Due to my schedule I had two first days.  Last Thursday, and Wednesday.  First days always totally kick my butt.  I put out a lot of energy to get everyone on board with my plan; we have 10 week quarters, so we shoot out of the box and any reluctance slows us down!  So last night I picked up Point Roberts after not knitting on it for nearly a week.  I just needed to work on something that did not require any thought or energy.

Due to a miscount at some point I am actually now at 42 stitches per side (four), so I still have a bit to go, but it is going faster and I need to think about moving to shorter needles.  If you have been following the progress on this project, you will recall that at the beginning I was working off the outside of the ball of the contrast color because I had another project working off the inside.  You might also recall that I ended up with a 4″ per side larger scarf than I had originally planned.  I ran out of main color yarn last week (at approximately 8″–I need 12″), so just decided to finish up with the contrast color.  So I’ve been working on that outside yarn, but last night I nearly reached the other project.  I have also become tangled so I have a bit of untangling to do, then I’m going to have to undo that original project so I can finish Point Roberts.

The original project was a hat.  I still really like the idea, but I had already had some thoughts about changes, and I think I’d rather do it out a non-superwash sock yarn, so I don’t regret having to take it out.  Not sure why I didn’t undo it sooner.  Oh yeah, because I’m too lazy and really I’d rather just knit most evenings.  But tonight I undo the original project, untangle, and press on toward the center of Point Roberts!  The pattern will be available May 15.  I’ve got a cool felt ball embellishment to finish it off.  I make most embellishments optional because I get that not everyone is going to be as into them as I might be.  This is why my patterns are worth every penny–I’ve sorted every single little thing out for you so you can just do the knitting part.  You can thank me by buying my patterns!