It is time for gathering needles when twice in one week I have not been able to find circular needles that I need.  It is entirely possible that the US size 2(2.75mm) circular needles I sought do not exist in my collection, but that I couldn’t find a US size 3(3.0mm) or even a size 3(3.25mm) means the time has come to begin gathering needles into their proper places.

Gathering Needles On The Loose 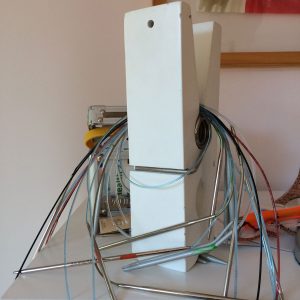 This of course would not be necessary if I just put them away. Linda used to put them away for me if I hung them on the huge clothespin or put them on her desk, but now there is no one to take them from their hanging place but me.  And I don’t like putting them away. Sometimes I get them onto their hanging place, but just as often they are laying about on my desk, or in my knitting box in the living room, or in projects that have been set aside. I own a lot of needles, so it is really bad when I can’t find what I need.

The first step is to gather all the loose needles onto the clothespin so I can begin to sort them out.  It is better to just get them into a central location than to worry about doing the sorting right now.  No US size 2(2.75mm) circulars yet, but the first round up was rather cursory so I will have to go a little deeper to determine if I even own them.

On one end of my desk I can see some unfiled dpns and a couple pairs of circulars stuck into a project.  I know I did that because I haven’t written the pattern and I wanted to be sure I kept track of the needles.  Of course I could take a photo and make some notes and then the needles could be put away—or at least hung up.  This is always tricky because I think I will remember things, but know I won’t so I do try to keep needles with projects.

I once started to put my needles into Ravelry, but that clearly didn’t hold my interest–there are only 12 needles in my Ravelry list.  Just gathering needles on the loose netted a dozen circulars to add to the dozen already hanging! I may have had a needle inventory in Excel at some point, but nothing logical comes up when I search my computer. I think there were just too many steps on Ravelry, but I see that there is now a quick way to add them in without details. Boy that is for me!

My mother always said, “No time like the present!”, so while I am doing some other housekeeping chores in my office I’m going to fill in the card so I can put away what I’ve got hanging right now.

This little chore revealed several needles that hadn’t been color coded, and four interchangeables in addition to regular circulars. Now I have a little color-coding project for this weekend. Among the uncoded is the size 2 I was looking for.  It is an old needle–I think maybe more than 30 years old, so I may get a new one anyway.

Today I made my debut on Anzula’s blog!  I will be writing about their yarns in the months ahead, and re-introducing some of my patterns as I get the patterns updated and new samples made.  This is about Milky Way, an 80% milk protein, 20% super wash merino lace weight. I loved working with it, but this is a yarn that wants to be blocked and it got better and better each step of the way–wet blocked then steam blocked.  Now maybe I’ll start the project I have in mind for it–since I’ve located plenty of needles!