Do you ever have that feeling of getting energized just by touching or seeing something you really love? This feeling often makes me move projects into active status even though I need to work on other things.

Many of my projects get attention because they make me feel this way, but other things, which I also want to do, don’t have this same energy around them, and they continually get put aside. I feel like I need to find that kernel in every project so they are all energized properly!

Imagine looking at a ball of yarn, getting the image or idea of what you want to do with it, and then doing it. That’s the sensation I feel when I am exploring ideas and getting energized.

What am I getting energized about?

This morning I pulled out my paper stitches for a video I am shooting. I need to cut out more of them, which is kind of a pain, but for today I just need a few. I immediately started arranging them into a stitch pattern and I could just feel myself getting energized, even before I’d really decided how I was going to use them.

I’ve been crazily knitting and working on my re-imagining of the toesies and footsies pattern I created in about 2006. I am so excited about all the techniques I’ve incorporated: this has become a SYSTEM, not a pattern. It is an education opportunity. The thing that has me getting energized is that everything in there works in other part of knitting. So it isn’t “just sock” stuff! But because it is done in foot coverings, it goes very quickly and allows much more time for exploring those techniques! When released the SYSTEM will be called Cairo.

I’m creating a short class on making your own Action Charts. I really feel like this is a “signature” thing I created, but anyone can make their own, so I’m doing a class.  This is a ton of work and will involve going back to editing videos which is the opposite of getting energized for me, but I think Action Charts and stacked stitch patterns unlocks a key part of knitting for those willing to go there.

Action Charts take a written stitch pattern, find the stacked repeat, then put it into a chart where each stitch represented is both stacked, and shows what to work from the working side. I love this graphic which takes a stitch pattern and stacks it into a nicely readable chart. 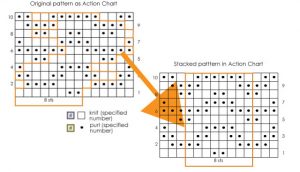