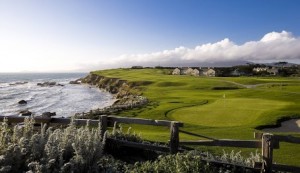 Today I’m in Half Moon Bay. A boondoggle with Mitch. He’s at a conference and I’m sitting in the room. Sunny overhead, but clouds over the ocean and the grass on the knoll outside is sideways. No travelogue today because I forgot to bring my notes.

Tomorrow afternoon Mitch will take me to BART at SFO so I can train into downtown to teach the first class of the quarter at FIDM. I have to say that I feel less cheated than I usually do so I must have had nearly enough time off! Today I have to get everything loaded onto the e-learning site so students have access to all the handouts online. I love the cloud. Dropbox, Evernote, e-Learning, all these things allow me to do my varied jobs from wherever I am–especially when I have my laptop. I sit here and I see little balloons telling me what files are being saved by Wendy, and she and I exchange notes and task assignments throughout her workday in Evernote. We talk via Skype every couple of weeks, but I find I am a little lonely on the days that I work and she doesn’t. Those little bubbles and changing tasks make me feel I’m working with someone instead of alone.

But being someplace other than my office is, I hope, going to allow me to focus on some projects that are this close to being finished, but that keep not getting finished because of other distractions. Speaking of distractions, yes, the remodeling should be done, but it isn’t. The bathroom on the floor where my office is (called Jill’s Bathroom) is finished except for a couple of punch list items. It is our only current working bathroom. But one of the things I did in the remodel was to have them turn it into a two-sink bathroom. There was room, and that seems like a really nice add-on. And now that we are using this one as a real bathroom, I am so happy I did it. The other bathroom we were using (Mitch’s bathroom because it is outside his home office) was tiny and only has one sink. Mitch and I love each other and spend a lot of time together, but frankly, I like having my own sink.  We’ve also gotten the kitchen almost back. Mostly punch-list items so I have functioning sink & appliances and I’ve begun putting shelf liner into the cabinets so once the punch list items are resolved I will be able to move everything back. The sideboard in the dining room, where I stashed all the dishes, glassware, extra pots, pans, etc. has also been unshrouded so I can, say, find another martini glass when Mitch knocks over and breaks the one I had purchased at the hardware store early in the remodel. Fortunately, it was not being used when it was broken.

The project I am knitting, a version of Ashland in Sterling & Silk took a big step backwards yesterday. I knew there was a mistake, but I thought it would be okay. Maybe that’s because I was knitting while drinking the above-referenced martinis. So I took out about 18 rows which is really 36 rows, plus 2 short row rows. But it really zips along pretty nicely so I don’t see this as a huge setback. I do need to do some calendar work to figure out how much I need to get done every day to hit my April 27 deadline.  And although I have not finished the Remarkables that I started in February, I’m dying to start another piece. 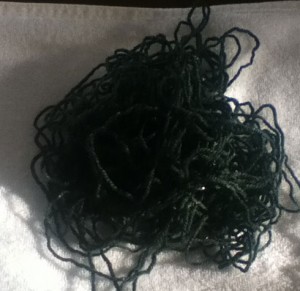 Mondays are usually the day I go through my extensive lists and try to clear off my desk.  Today I can do the lists, but not the clearing.  I have some big-time planning on my agenda this week.  I am trying to turn my seat-of-the-pants approach into a more thoughtful and plan-ful one.  Not easy!  And when I think of what I want/need/must do, it makes me wonder why I think I have time for knitting projects!  Yikes.  I will probably have to pass that dream project off to someone else.  I should finish my Remarkables.  Poot.

In case the title of this post didn’t make you start singing, it is from a Bangles song.  It was written for the group by Prince and was on their second album, released in 1986.  The single (yes, remember those?) went to no. 2 in the US, UK & Germany.  Wikipedia research.  I can’t vouch for it.