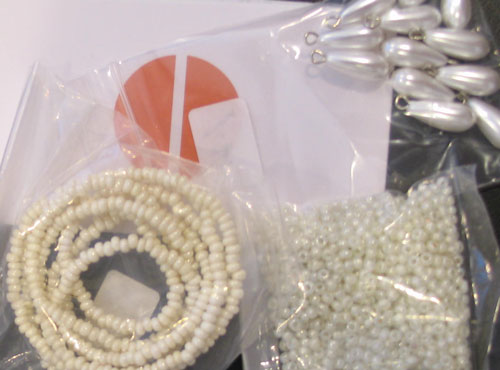 I’ve been wanting to knit with beads again.  I’ve not done it since I knit the Tuscany Capelet a couple of years ago.  Pulling the yarn through the beads is the only thing difficult about it, after you figure out how you want them to be used in your project.  I have a small idea I want to pursue.

Yesterday I stopped into a shop  called Yone that I often pass on the way to an appointment.  Crazy amount of beads in there and I’m sure there is some order to it, but not really being a bead person it took a lot to not run out of there.  But I knew that I was looking for something small and “pearl”.  So I didn’t have to consider anything else.  I found some beads, then found the tear drop ones, and the person behind the counter found me seed beads that kind of matched.  She offered me a class schedule, but I said I am so busy knitting I don’t have time to do anything else with my hands (she wisely didn’t push it on me) and the other gal said she was a knitter.

I shared with them what I was planning and clearly they understood it as much as I would if they briefly explained their jewelry to me.  But they were interested.  And the knitter and I shared how great it is at the end of the day to sit and knit.  And the other person said she got the same feeling from her cross stitch.  Then a bunch of people came in and I slipped out with my beads.  $6.