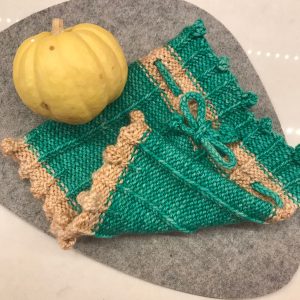 If you read my Anzula blog post on Cricket and are looking for the Messy-bun Hat Recipe, this is the right place. How does a recipe differ from a pattern?  A recipe tells you the steps to take, with the inputs needed, but isn’t formally drafted as a pattern.  I tend to do them for things like this Messy-bun hat where I just had an idea, executed it, and I don’t feel like going through the process of writing, tech editing, photographing, and promoting a pattern.  Lucky you—this doesn’t cost a thing!

I did this as a swatch for a forthcoming project.  Be sure to record your information so you have the gauge details later on—you never know.  Seriously, I keep all of my blocked and unblocked gauge information so I at least know where I should start. 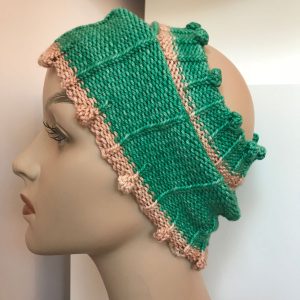 This pattern is part of a sweater collection that has not been published in its entirety.  There are so many reasons!  The hats got published here.  You can use that pattern if you like.  Also the Lisse Hat will work.

This is worked in-the-round and I used US size 3[3.25mm] needles  I actually used 24″ circulars and the magic loop—and longer needles would have been easier!

I have tried the hat on, so there was some stretching before the gauge was taken.

How to proceed to a Messy-Bun Hat 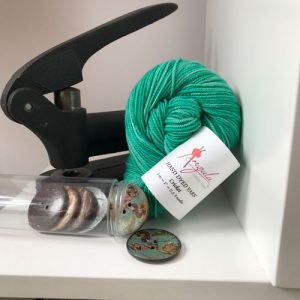 My hat is 15+” around.  I’m going to use it as an ear warmer when I run, so I didn’t want it loose.  I have very short hair and not a big head (just under 22″).  It is the perfect size.  This is made from Anzula Cricket and I used Lottie as my main color (MC) and Peach as my contrast color (CC). 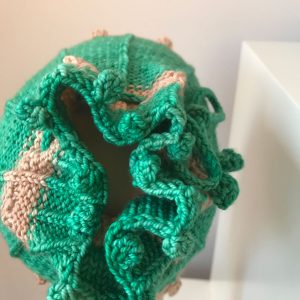 My Messy-bun hat consumed 51g of yarn, including the I-cord.  I worked 52 rounds, including the bobblet rounds.  The finished height of the Messy-Bun hat is 7″ and it could be worked shorter–or work it longer (like 10″) for a rectangle hat closed by the I-cord.  In that case, I’d make the Eyelet Round about 3″ from the top.

I almost forgot to say that the purl rib makes for an extremely wearable fabric.  The inside is smooth stockinette, instead of bumpy purl.  So my goal of a comforable ear warmer is nicely met.

I did some reknitting above the eyelet round because I forgot to work the 4-stitch purl rib.  I think I spent 8 to 10 hours making this and the i-cord.  This was a perfect project to work on when I was tired. 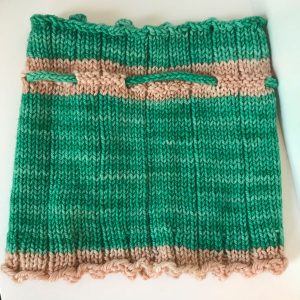 I had some leftover yarn that I used for my CC on this project.  If I hadn’t been also doing something else with it, I would have enough yarn left to do another messy-bun hat from my MC skein.  Let’s say you had to buy two skeins of Cricket.  At a bit over 100g you should be able to get four hats, in different combinations.  The total yarn investment would be about $70.  If you spent eight hours knitting each messy-bun hat you would have spent approximately $2.20/hour and $17.50 per hat.  I don’t count your labor, because you would have been knitting anyway–this is just to encourage you to spend a little more on yarn for your knitting pleasure.