I’m in the midst of working up some designs for knitters who are anxiously awaiting the patterns. Each design is a revision of a piece already done by me in another form–something kind of new to me, but that’s how things are playing out right now. 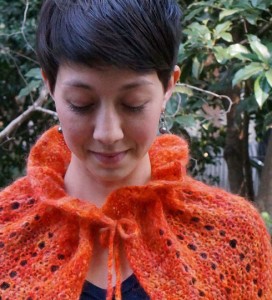 This one is waiting for the final version of the pattern and for me to finish up the endless details necessary to launch a design. To date I haven’t gotten it up on Jill Wolcott Knits but have drafted a pattern page for Ravelry so I could run an ad for Mount Emei beginning on April 1. We love this version of my capelette and the photos taken in Shanghai are perfect. More details later this week. You can read more about the construction of the capelette here. 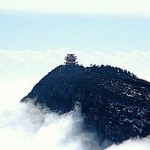 Mount Emei is one of the Four Sacred Buddhist Mountains of China, and is considered a place of enlightenment. Wendy found the name when looking for something that would suit the capelette and the yarn, which is called Nimbus from Infinite Twist. You know how sometimes the feel of the name is just right? This was one of those. You can read more here.

I always have an itch to travel when I’m searching for names; this one reminds me of the book The Thousand Autumns of Jacob de Zoet by David Mitchell, which was set in Japan, but had a portion of the action in the mountains, and this is what I visualized as I listened to the book. I wasn’t sure I would like it, and at 500 pages, I figured it would be easier to listen to than read, so it was one of my 2013 “listens”. I ended up loving it although it took a while to warm up to it–then the descriptions were so wonderful the story really became a continual journey to places I had to imagine. 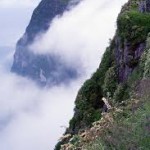 Looking at the photos, there isn’t much that would make me want to go here thought. I do not like cold, nor heights. Do you suppose there are any good restaurants there? We can all do an armchair trip, wearing Mount Emei in our favorite color!