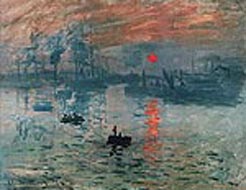 While we don’t get quite as late a start, it is Easter, and they set their clocks ahead, so it seems Paris is.  Offerings for café and croissant are slim, but we find a place near the Louve, then get on the Metro and make our way out to the Musee Martmottan-Monet.  Lots of walking, transferring, etc. But thanks to Mitch’s good navigational skills and Apps, we get to our destination without a hitch.  We have to walk a few blocks to the Musee.  It is in the very low 40s and is freaking freezing to people not used to this kind of weather and with insufficient clothes.  Mitch’s jacket it probably better than mine, but he forgot gloves, and let’s just say that although both of us have exposed ears, I have more hair. Neither of us thought to bring a hat.

This museum was well worth the trip.  Beautiful Monets plus Berthe Morisot.  Other impressionists and a large exhibit of an artist we saw in the L’Orangerie:  Marie Laurencin. Her early work is interesting, but I get the feeling that at some point she was issued all the pink and gray paint by the other abstract painters (men) and, to my eye, her work became stilted and less compelling.  I feel that I am getting new insights into Monet.  I believe that his obsession with painting the same subject matter over and over was less an obsession than a desire to see in a new way.  He ceased having to consider the subject matter at all and became able to just paint what he was seeing beyond that.  He could see light and color and explore ways of rendering stroke because the subject matter was already there in his muscles and brain.  In some of the later pieces you can see the door that would be opened by the abstract expressionists.  This also helps me understand Picasso a little better.  Picasso wasn’t interested so much in light and color as in our knowingness, and sought to shake that up.  Still don’t really understand why.  We spin by the First Empire art on the second floor, but are completely not interested.  I’m feeling quite overwhelmed; Mitch buys some post cards and we head back to Paris central. 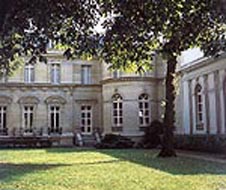 We have lunch in the Marais.  Onion soup followed by mussels.  We determine from the diners at the table next to us (Spanish?) that the portions are sufficient for Mitch and I to share mussels. after we each have a bowl of French onion soup.  This is a day of eating at, shall we say, formula restaurants.  We go to the Hotel de Ville for the couture exhibit, but it is closed for Easter.  We go to the Pompidou Center and slog through the 4th floor exhibit. Quite honestly, I don’t get this museum.  I see less than six pieces that are worth coming here for.  Aaacckk.  We try, but realize part way there, that we are too late to get back to the d’Orsay, so turn around and return to our hotel. 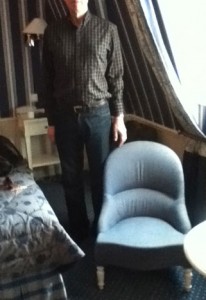 We spend the remainder of the afternoon-evening reading and knitting.  Mitch kindly posed for a picture of our diminutive chairs.  They are comfortable, but a little unsettling as you lower yourself into one, and requiring a little more effort to get out of.  I finish sock number 2, but realize that my first one is at a slightly different gauge, so I rip it back to the rib and start again.

Dinner is Italian.  We find a street of formula restaurants and choose one.  Kind of a funny, tourist experience that is shared by lots of others with few dining options on Easter. 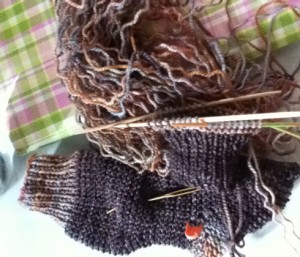 Chris Isaak was the featured entertainment.  I was excited about seeing him because I’ve not seen him since the 90s.  He is a great entertainer and there was lots of dancing and general enjoyment.  At the live auction one of our guests was one of the big spenders.  A very generous gift for her spouse (who looked incredibly nervous while the bidding was going on).  Mitch had put together a table of colleagues who live on the Peninsula and everyone had a great time.  I wore my Ashland capelet with the center button buttoned and I don’t think I even touched it and really forgot I was even wearing it except toward the end of the evening when I pulled it a little further down my arms because I was getting cold. There were lots of short dresses, and a lot of black and white so I felt I was just right for the evening.