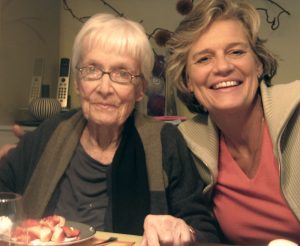 My mother, Jane Van Duyne (Wolcott) Lewis died on Mother’s Day, May 14, 2017. I would normally have written a blog post for today, but I’m going to take a pause from the usual technical knitting post. I’m just not feeling at all inclined to write, and especially think, right now.

I think it is a good thing to take a pause from my usual habits to make sure I can process this loss. My mom was 94 years old, and had enjoyed a rich and long life; we will miss her but it was good that she was able to go.  She maintained her mental acuity until the end. 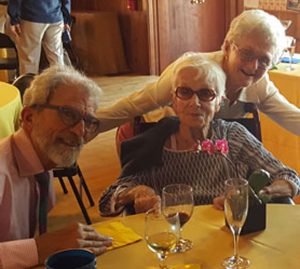 Although not as able to participate as in the past, Jane could rally for a party.

So instead of having spent the past couple of days composing a knitting-technique related blog post, I’ve been stepping through the usual process of death and the related reactions to that. I am staying at a hotel, spending the day at the Heritage where Mom lived sorting through what remains of her life. There were a lot of interruptions as staff came by to tell us how they would miss her; there was the usual distaste for actually going through someone’s stuff, and then there are all the bureaucratic things that have to be done.  Each of my siblings and I had awakened at some point early on Monday morning and gone through that mental list.  By myself, I had written mine down, and together we were able to get everything moving forward. 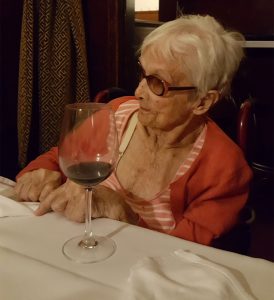 I have been trying, this morning, to find out where my mother’s father was born for the death certificate.  He was a successful San Francisco lawyer, and I can find plenty of cases he was involved in reported in legal documents online, but nothing about his personal life. I finally sign up for a free trial on Ancestry.com to get his place of birth. I know the sketchy details about him having done a little research in 1999.  He had another family. Although curious, it didn’t seem right to delve too deeply into this other family’s history–it would have been a shock 77 years on to find out that a half sibling existed, and his other daughter would have likely been dead so we would would have been telling her children.

We have been having some fun peeling back tiny layers as we share details that were revealed to us as we went along.