Yves Saint Laurent, The Perfection of Style is the current exhibit at the Seattle Art Museum. Mitch and I went to the members-only viewings last Saturday as a way to celebrate my birthday. If you haven’t been watching, it would be so easy to dismiss YSL as a doty French fashion designer from another era. He was, but his career opened up modern fashion. His work was the Perfection of Style, but also groundbreaking, audacious, and au courant. 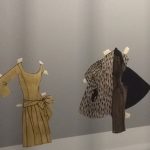 The Perfection of Style, the Exhibit

I was really looking forward to this exhibit not so much for the clothes, but because they were showing other parts of his work.  I don’t think anything will ever exceed the visit Mitch and I made to the Fondation Pierre Berge/Yves Saint Laurent in Paris 12 years ago. The exhibit there was exquisite and intimate, if not extensive enough for me!  The pieces each had a mirror behind them so that you could see them from 360 degrees.  We saw his art-inspired pieces which are simply unbelievable.  Having access to the best workrooms in the world definitely makes the perfection of style easier!  Mitch ended up being disappointed that there were none of those pieces here. 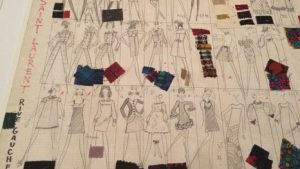 I mentioned to Mitch that I didn’t think this was actually going to cover any new ground.  I’ve got books, I’ve read books, I have actively followed him as long as I have been following fashion. I knew they were having artifacts that have not been exhibited before, but I didn’t guess how entrancing they would be for me.  I am, as you probably know, fascinated by the process of designing and creating. So watching YSL (yeah, the last 20 years weren’t that interesting!) find his voice, and how he wanted to show his own perfection of style, was always fascinating to me.  I never dreamed of owning a piece of YSL. It was the opportunity to watch genius. That he was supported throughout his career by Pierre Berge should not be discounted.  Berge did everything else, allowing YSL to be only a designer, artist, and dreamer. He also made them very rich men.

Even so, I could not have predicted how transfixed I would be by the artifacts! First there were paper dolls (and why???? didn’t they have paper dolls in the gift shop?) that he created when he was a teenager, and costumes he designed.  There was his famous nude photo which I remember as being incredibly audacious–and beautiful. Finally we get to the first room of YSL, and there are garments, which are lovely, but I cannot tear myself away from the sheets of designs with swatches.  I’m not sure exactly what they called them, but sheet after sheet of the equivalent of 17″ square graph paper, divided into columns, with the fabric pinned, the number in the fashion show, the category (day, night, night gowns, cocktail, etc.) and a sketch of each design.  I will be going back to look at those again. 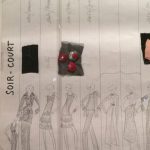 The Perfection of Style Nuts and Bolts

Access to workrooms, including milliners, beading, embroidery, tailors, drapers, sewers, and access to exquisite fabric, jewelry, shoes.  Did you know that if you purchase couture they have a dress form “kitted out” to be your shape on which garments are constructed and hung.  So these silent mannequins stood behind examples of toiles in muslin (not the crappy stuff we are familiar with!) on which design detail, placement, and fit are all worked out, and then are taken apart to make the patterns. They also had displays showing how a design was taken through the process from concept to costing to runway sample. 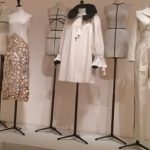 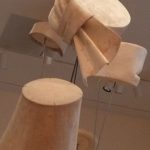 I was in heaven.  I am normally very reluctant to take photos, but I ended up with over 40 of them.  Many of them aren’t worth sharing, but indulge me by letting me share some with you. 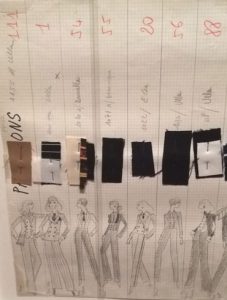 I tried to sort that out this week. I guess if there was any one thing, it was pants. I wore pants as soon as I was allowed to. That probably sounds silly, but I did not own jeans until I was 11 years old (1965), and I had to buy them myself because my parents didn’t approve.  We had pants, but they were for hanging out and playing, not for wearing out in the world.  I was in high school before girls were allowed to wear pants to school. I was only allowed to wear “pantsuits”.

YSL brought to us, particularly when he started Rive Gauche, an elevated concept of “sportswear” as we understood that term back then. He showed that elegant clothes did not have to be a dress or gown, but could be offered as a concept, and sold as separates so that the purchaser ultimately controlled their look.  This was so new and radical in an age where haute couture set the tone.  YSL looked to the “street” to see what young people wanted to look like, and then delivered, at a price. 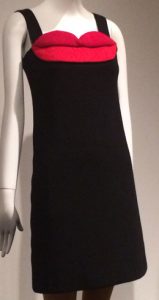 Remember, our world was a world of paper, and photographs.  Access to European fashion was through strict gatekeepers, and designed only for the wealthy. So we would pore over magazines looking for information on style and fashion; when we saw ourselves (young people) in those vaunted arenas, it was a revelation. YSL allowed us to dream of our own perfection of style.

The exhibit is open until January 8.  If you are in the area, it is definitely worth a stop.