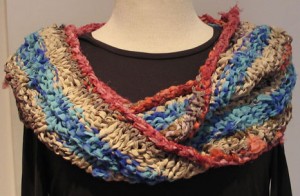 I know I have been trying to be a voice of reason about starting new projects and not finishing, but sometimes there is just nothing to do but exactly that!

When I say quick fix–I’m not talking about repairing, or amending, I’m talking mainlining! You know. A direct hit of pure knitting.

I have been exhausted this week, so I wanted to knit, but was really too tired to even think about existing projects that I could pick up. This is how we get in trouble isn’t it? Knowing the trouble I could get into I wanted to do something that didn’t lead too far down another path, and something that was on my list of things I planned to do anyway.

I have had a couple of skeins of Soft Recycled Silk Ribbon from Himalaya Yarn for at least a year, maybe more. I tried it in a garment and it was just too bulky, so it needed to go into an accessory, but what? A couple of months ago it occurred to me that it would be great in a moebius cowl. I didn’t want to do a new pattern, so I thought maybe I could just knit Esperance, casting on one of the smallest sizes, and see what happened. I did not swatch and used size 15(10mm) needles because I had interchangeable needles and could make the cord long enough for a moebius. 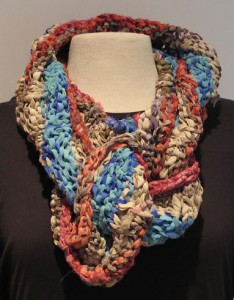 So on Tuesday I cast on at about 5 pm and knit about 4 hours on it. Give or take. I wasn’t keeping track and I made and ate dinner and dessert (fruit!), so that is just an estimate based on the length of time I was on the couch. On Wednesday I estimated how much yardage I would need to bind off, and knit to the end of the round I was on (the 8th) and then began binding off. I used about 20 yards of yarn in the bind off and I ended up with about 5 or 6 yards left. I weighed the finished piece and it was 193g. When I threw the remainder yarn onto the scale it came in at 201g.

I haven’t blocked it yet, and since it is chiffon, not really yarn, I don’t know that it will change much, but before blocking it is about 5.5″ deep and 40″ diameter. I didn’t worry about the joins that were tight or machine sewn together, I just knit them in; there were places where I didn’t feel the joins were tight or they had too-long tails, and so I undid those and hand stitched them together. I used the yarn as it came to me–except for saving the red for last. There was a bit (a yard or two) of royal blue which I didn’t use. Not my color.

I initially felt the finished piece was a little skimpy on depth and too long, but look at the photos I took while styling it on my dress form. Read the newsletter tomorrow to get instructions. 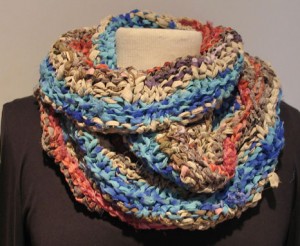 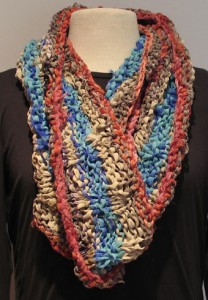 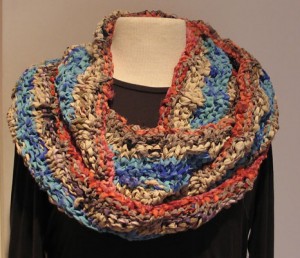