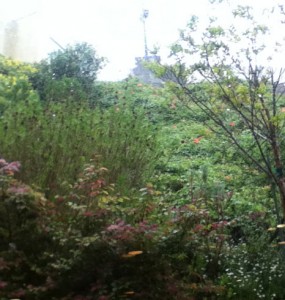 We’re getting rain in SF. Finally, and pretty late, but it is good to get it anyway. There was a huge downpour during the night, and we had thunder and lightening Monday.  I was kind of hoping that it would rain this morning so I wouldn’t have to go run. No such luck. Got geared up and out I went–only to have it start to rain. I was too far in to quit running, and it seemed like it would be fairly short-lived, so I pressed on. That is what I almost always do on anything. Press on. I was right, and it was pretty short-lived, and I got my run in (although I’ll admit to taking the longer, easier, final piece rather than the shorter, harder one). No sooner had I sat down at my desk than it really started to rain–really rain.  But now I’m done with the run and I don’t care if it rains!  The hummingbirds who eat at my feeder do.  I caught one with my iPod–through the glass door–sitting down for a quick feed. 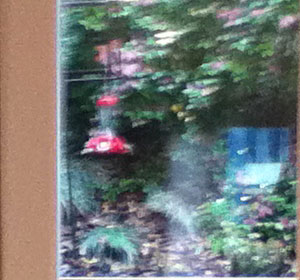 I read a blog post yesterday about a sweater that had to be reknit three times before it was right.  Each time it fell short because of some unwillingness to take into account real information.  Like gauge.  Like body measurements.  Like how the sweater would actually be worn.  I applaud any knitter who will rip back twice!  Starting a new knitting project is so driven by the flush of falling in love or lust that it often lacks the thought we need to give the project we are embarking on. 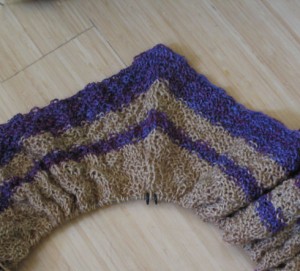 If you have ever had a project essentially ruined because the cast on wasn’t right, you can relate to how important that decision is.  That is why I always say what I cast on I used in every pattern.  I am a huge fan of the flexible long-tail cast on because of the flexibility it brings to its job. I used it in my outside-in scarf.  Because I would be totally, well, devastated if I finished this scarf and the outside was too tight.  I made a quickie video a couple of years ago of how to do it which you can access from the technique description in my technique library.  Instead, there is enough flexibility in the cast on that I was able to block it flat despite the fact that it is bigger than I thought it would be. 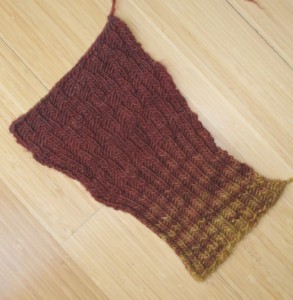 I had to take time off from my outside-in scarf to do a swatch on Sunday. Monday I think I got about six rounds down while watching Cosmos.  Learned the difference between a dark star and a black hole and what the Theory of Relativity really means.  I’m sure someone has tried to explain those things to me before.  I have long known that I take in more information when I am doing something with my hands while listening.  Once again, without knowing anything about the level of knowledge being dispensed, I compliment them on their graphics and methods of sharing information.  Storytelling is so much more interesting than lectures!  Tuesday night was The Story of the Jews.  Again, I learned things I didn’t know or had never given any thought to.  Another learning experience driven by stories and resulting in another six or so rounds.  Starting to want some more rapid progress.  I’ll try to knit faster tonight!