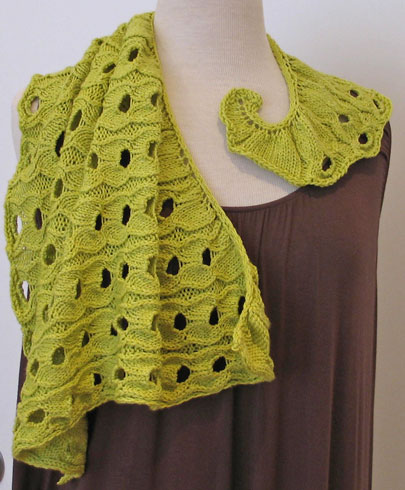 I made this Curls Infuscate because I was really curious about the stitch pattern, how a larger piece unfolds (uncurls?), and I had some thoughts about doing other things with the Curls concept. I had a full skein of the yarn, and I wondered how large a scarf/shawl I would get, so I set off making this version. In the meantime, I ended up using the stitch pattern for the trim on a yet-to-be released worsted cardigan (Karmoy).

I wanted a scarf that mimicked the way the trim worked on the cardigan (and I had an extra skein of yarn!), so I created the soon-to-be released scarf (Kormt). The scarf hasn’t been released because I cannot do a rolled hem in the chiffon I want to use in the photos in a way that is at all acceptable to me (my standards for my hand sewing are realistic, not perfectionistic!). I’ve practiced, I’ve tried various methods that have been suggested, and I really hate my work and the completely unprofessional results I am getting. At this point I have two, maybe three, possible solutions:

As soon as I typed this list it seemed like there should be instructions somewhere that I could make work; it just isn’t like me to give up and say I can’t figure out something to do with needlework!, I paused and took another look on the internet. Not sure why this tutorial has never come up before, but voila! an acceptable hem from my hands!

I am really excited about finding this tutorial because now I can get the pattern ready for release. I cannot have anything in a pattern that I cannot explain and, more importantly, do! 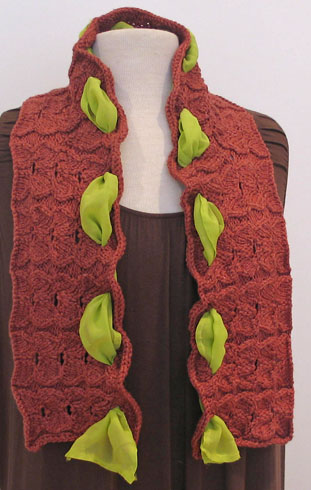 This ordeal over the rolled hem (it has been at least two or three months) is a good reminder to me how important language is in explaining things.  It is entirely possible that every other tutorial I referred to said essentially the same thing, but they didn’t say it in a way that made sense to me. It is also possible that the photographs were done in a way that helped me see the methodology better.  I also liked that she stated at the outset her hands were unmanicured!

So long and short: It may not be you. But you may have to search to find the explanation that can get you around your roadblock. Or ask for help.

Email me if you want the Kormt pattern to test before I have photos and can release the pattern.  It can be done in either worsted or sport.  It is a one-skein project (S, M) in worsted using Civility from Elemental Affects which has 250 yards to 4 ounces or in sport, which has 500 yards to 112 grams.  You don’t have to do the chiffon! If you make the scarf and give me a photo, I’ll give you the completed pattern when released.