San Jose TNNA ended almost a month ago. I still have some booths I want to report on, so here goes! I was not a fan of San Jose TNNA, so I was surprised that it had one of the best convention center layouts, had decent food, but many of the restaurants closed over the weekend and service tended to be indifferent to bad. The weather at San Jose TNNA was horrible.  We go to California and Southwestern US to find good weather, but it was at the beginning of the torrential rains in California.  Winter TNNA often offers up fairly cold temperatures, but sun. Not so this time.

Go here for a report on Booths A through L.

My thoughts on the Yarn Industry are here.

Discover What’s New is where I always start.

If you didn’t read Booths A through L, these are just booths I took photos of and made note of.  There was much more. 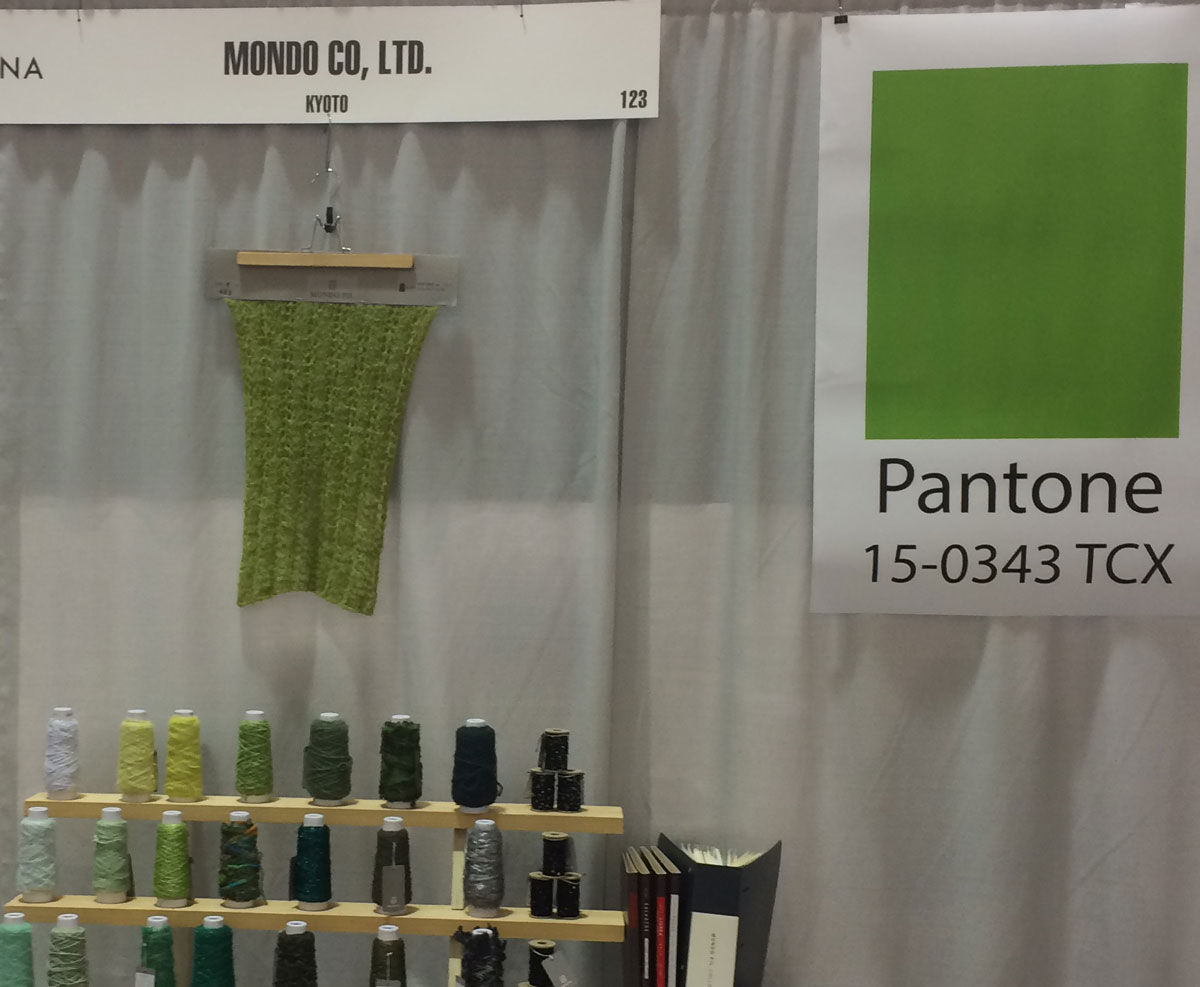 Mondo Co. Ltd.  This is where Conner is, representing this Japanese yarn.  He has lots of ideas about how to use these yarns highlighting their unique structures, and making them less “novelty” yarns which is what they appear to be at first.  I give him props for using Pantone’s color or the year.  Conner is a knitter and really knows his yarns.  On chatting further with him (we got talking about how to use color in shops), it turns out he went to the Savannah College of Art and Design (SCAD), majoring in architecture. His company is International Yarn Distributors. Go there to see the yarns.  It is strictly wholesale, so pass the word to your local yarn shop if you are interested. 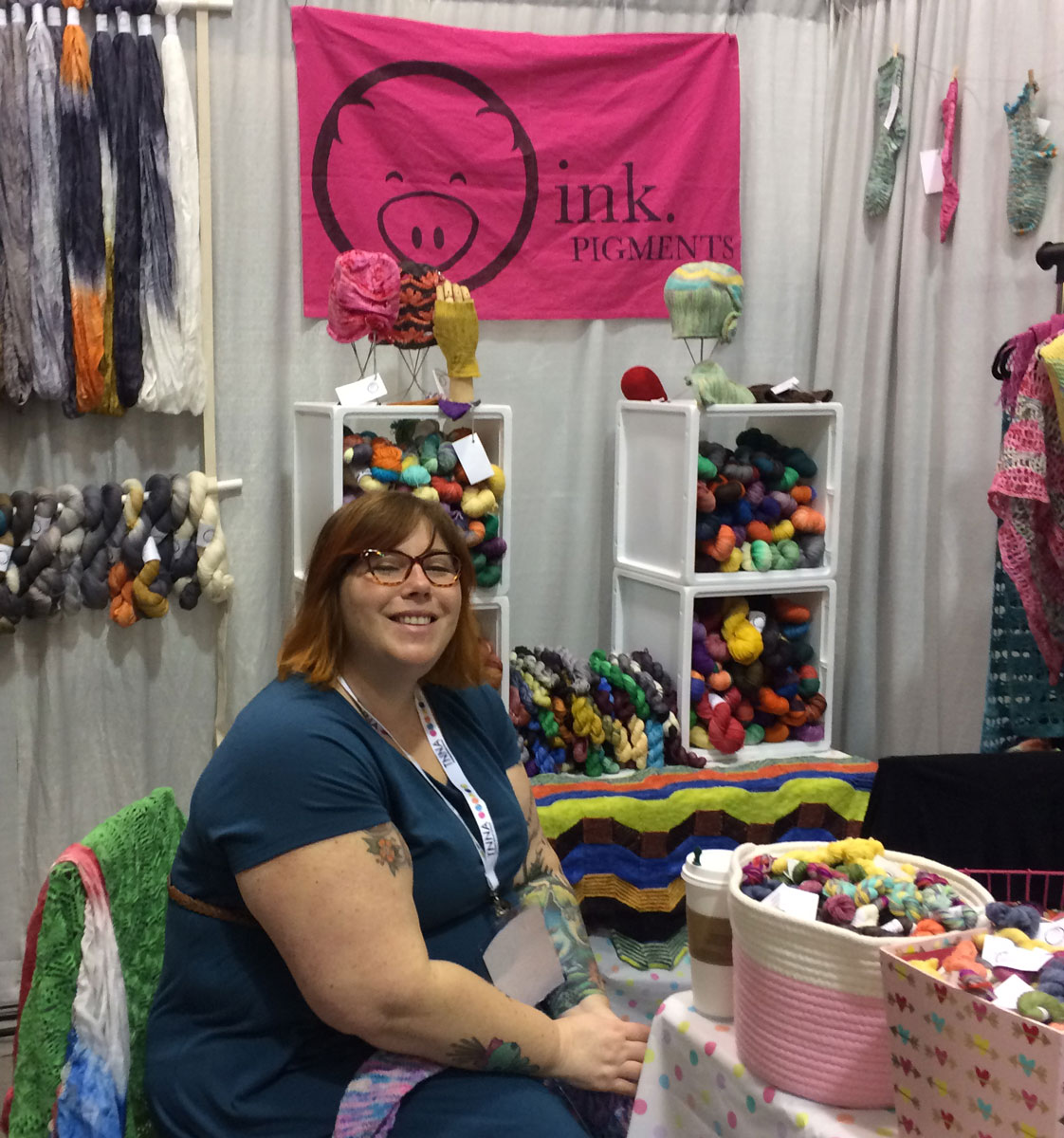 Oink Pigments.   Sara wanted to go here to get a kit they had for Sample It (Sara works in the Freia Fibers booth so doesn’t get to shop). It was fun to look at their yarn, and they had a lot going on, but when I saw the hand-dyed sick that was in the kits, I bought three of them.  I need that fabric for projects in my studio!  Interesting palettes, and slightly different dye perspective. There is room for lots of hand dyers. 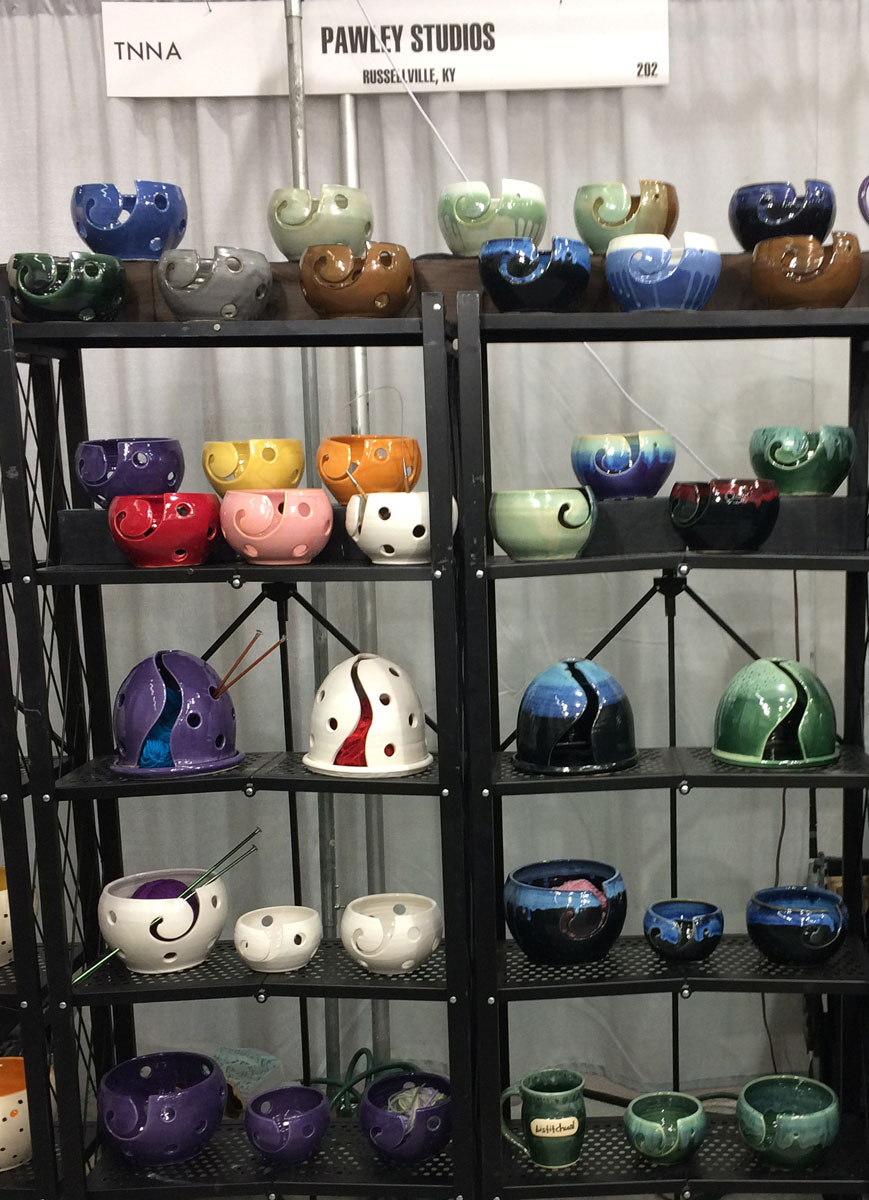 Pawley Studios.  Yarn bowls and, new-to-me, yarn bells.  Yarn bells provide some protection from pets and toddlers. I’ve always loved these yarn bowls, but they aren’t really my style. Plus I can just picture Mitch or me kicking them across the floor, so I stick with plastic boxes.  There are also mugs. I feel for them because packing and unpacking this stuff must be a chore. 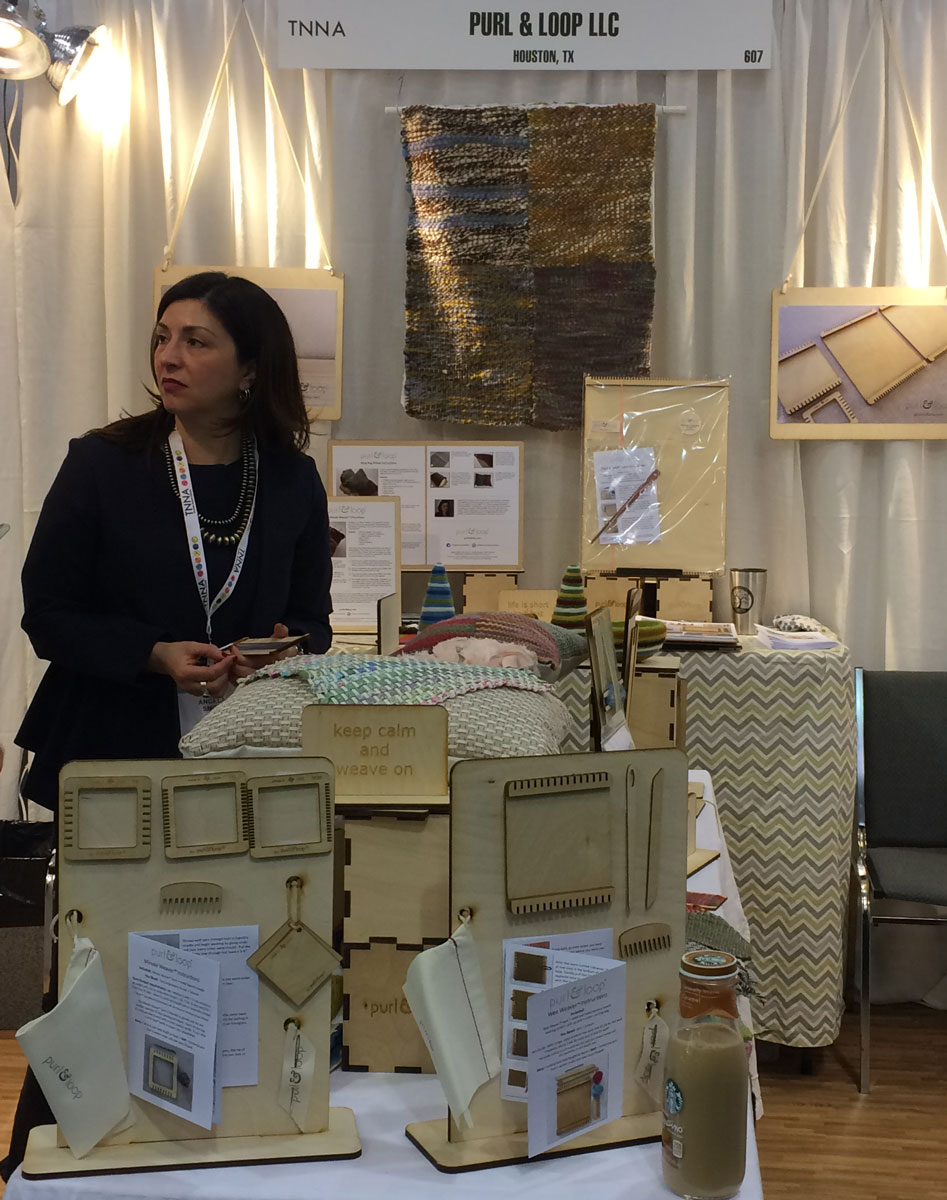 Purl & Loop.  I stopped here because I know Liz Gipson who invented/conceived of these. If you are a weaver, and ever wanted to experiment without having to warp your loom, you can thank Liz for coming up with this idea.  It is such a duh!, it is surprising no one thought of it sooner.  There are also felting kits, and some other needlework items.  This was a lovely confluence of product developer and distributor coming together.  I’m acquainted with Liz through TNNA volunteer work. 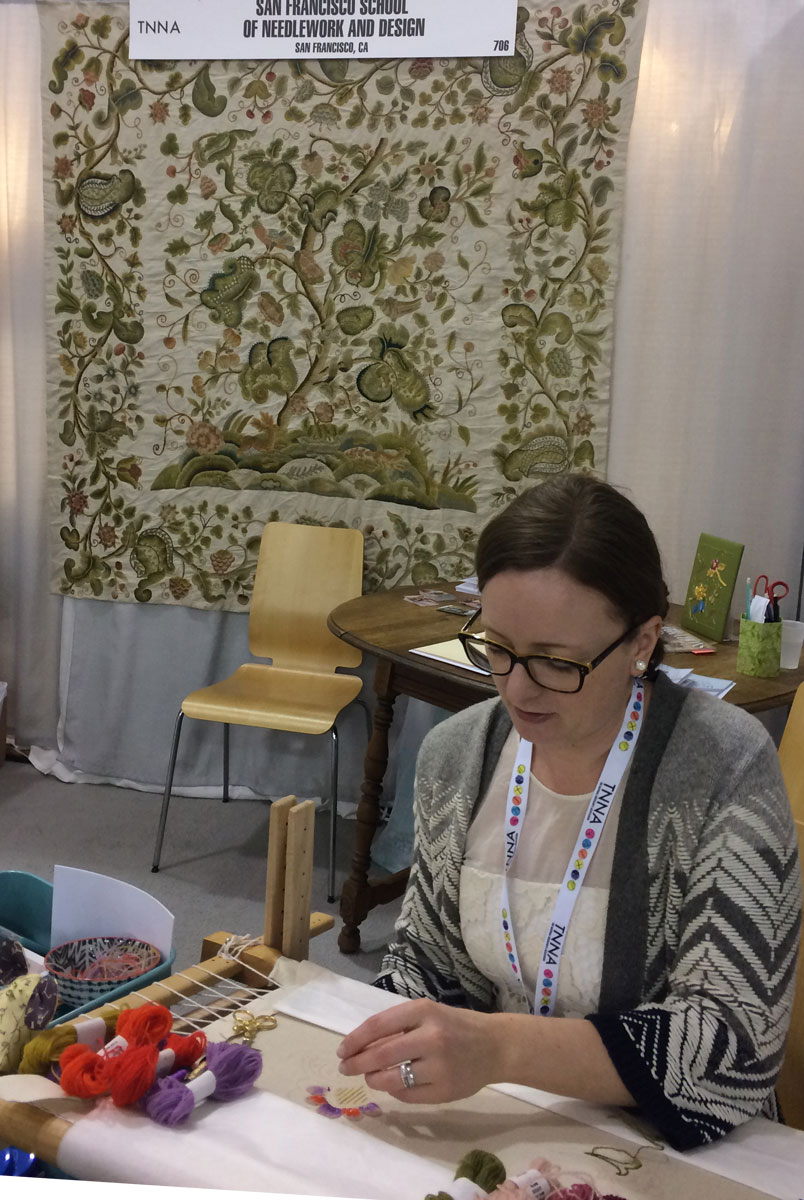 San Francisco School of Needlework and Design.  Oh Sara and I both were so taken with this!  There was some mixed media projects, but mostly it was just really such an appealing idea–especially to me as a keen educator!  Cannot recall the name of the woman who started this, and who we talked to.  I thought I would get to their museum while I was in San Francisco, but that didn’t happen.  It reminded me of the student I had at FIDM who had done a year at the Lesage Embroidery school in Paris while her husband was working there–and the sequin work (that was her focus) in her work was unbelievable. 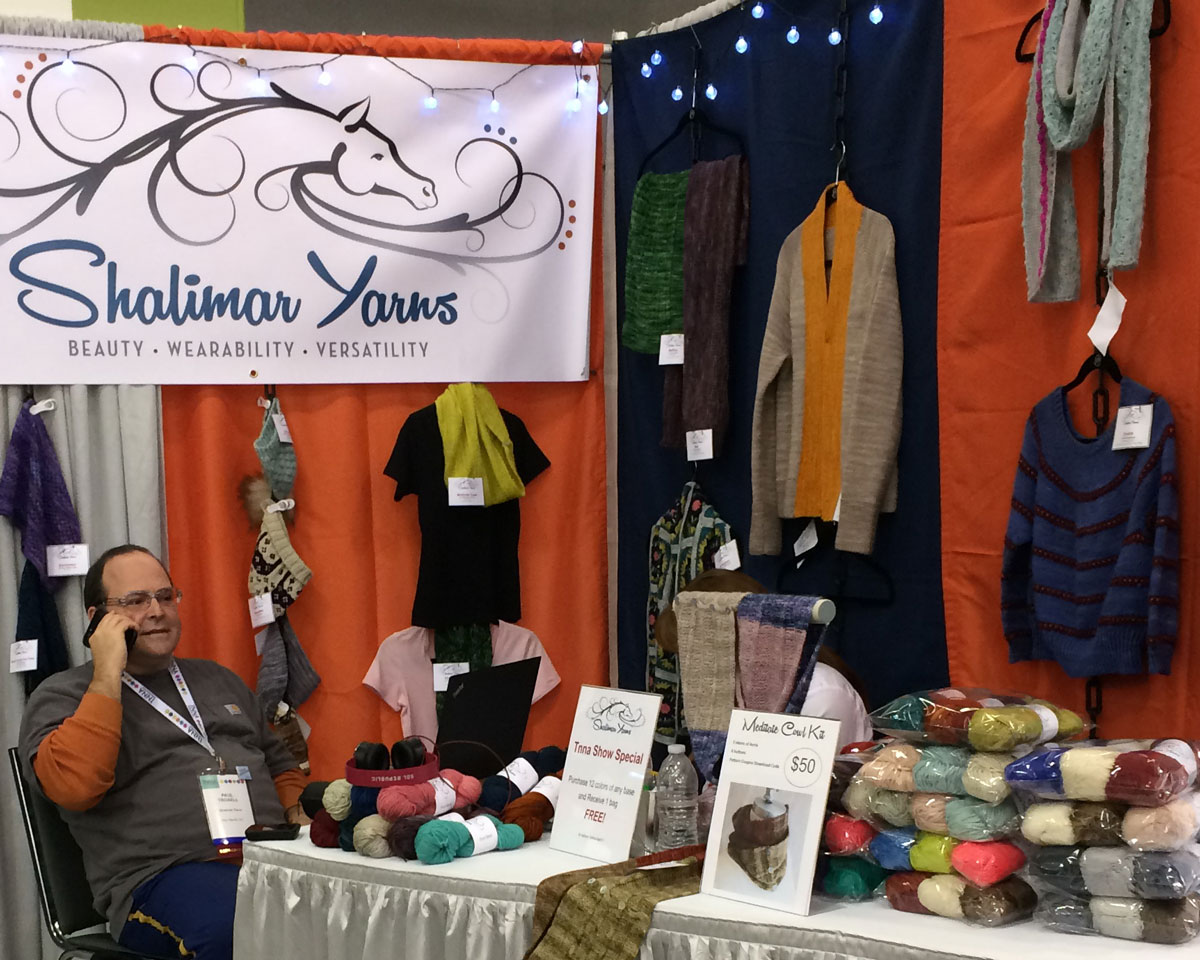 Shalimar Yarns. I’ve known Kristi and Paul from trade shows and retail yarn shows probably for ten years. Kristi was a local yarn shop owner before she started dyeing professionally.  She sold Knit or Die items and she is not afraid to speak her mind.  It is what I like about her!  She also dyes really beautiful yarn which reflect her lovely red-head color sense.  Not something you always see. Take a look at the yarn.  You will likely see why I am always going back to their booth.

Those are just selected booths that I visited and thought you’d like to know about.

This is an unofficial honor, since I just decided to do it. 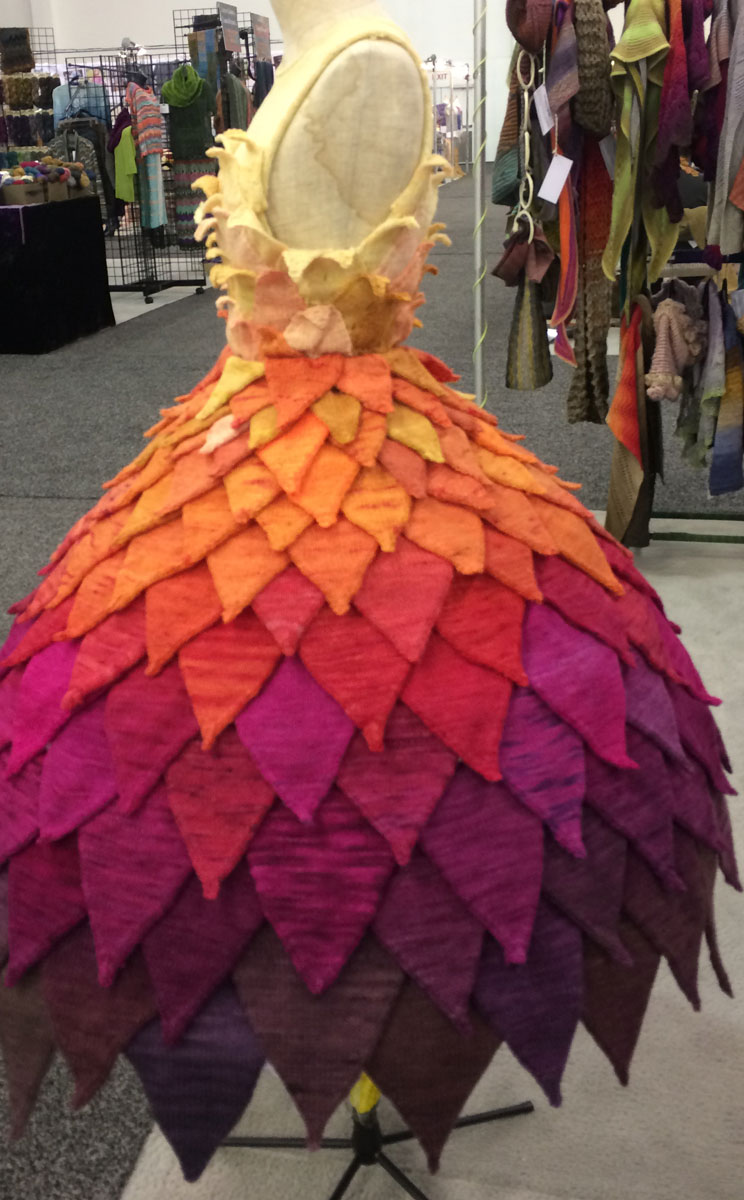 The winner is, in my book, Freia Fine Handpaints.  Not only did Tina do a knock-out display piece, but since her first booth as a dyer, she has had the sexiest yarn put up around.  Now she is copied a lot, but she was the first to do the long-run gradients, and to put it up as a cake instead of a ball, skein, or hank.  Tina Whitmore was clever when she was doing KnitWhits, but her genius with color makes Freia Fine Hardpaints what it is.  That and the fact that she has had a vision, stubbornly stuck to it, and made sure that her product is presented only as she wants it presented.  I’ve been hanging out with Tina, and Sara, since 2012 Winter TNNA (in Phoenix).  Tina generously gave me a ride to my hotel in San Francisco at the end of the show, despite being sick with the cold.

This is why I keep going to TNNA.  I renew acquaintances, make new ones, and see how we are all growing and changing as the industry soldiers on.  I’ll be in Columbus in June.