Seed, Moss, and Double seed. I know Seed, but for Moss and Double Seed clarification is always necessary to make sure I use the right name.

Late last week this link was shared on Facebook. Of course I immediately had to go see what was in it. There are 291 knitting books from the University of Southhampton Library. They are all British and if you are looking for some patterns for men from last century, a treasure trove. I digress, but I opened one of the books and soon ran across a reference to Moss stitch. Which is our Seed stitch. There was a later explanation of Double Moss, and never anything about Double Seed.

This was definitely two [knitting] cultures divided by a single language; because their Moss is our Seed! No wonder we need Moss and Seed clarification!

Seed Clarification: What is Seed Stitch?

I love this explanation contained in Questions Answered About Knitting, by Ursula Bloom (1946, London). We will need to substitute Seed for Moss for this to make sense in our knitting language:

Moss [seed] stitch is knit one, purl one to the end of the line. When coming back begin with the same stitch as that with which you left off. If you ended purl, you start purl, if you ended plain you start plain. The pattern is a small series of spots. . . . 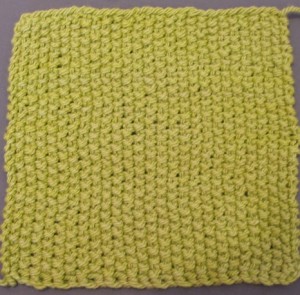 So you see, if you follow Ms. Bloom’s rule above, you will be doing our Seed stitch and it doesn’t matter whether you have an even or odd number of stitches. I love this.

Again, I think it might be interesting to see what Ms. Bloom has to say in Questions Answered About Knitting:

Double moss [seed] stitch is a tiny check, suitable for babies’ coats in fine wool. Cast on a number of stitches divisible by four.  Remember it is impossible to change this. You must always, when working a pattern, have the right number of stitches as directed or the whole thing will go wrong. . . . The first row is, knit 2, purl 2 to the end, and you end on purl 2. The next row is exactly the same. The third row reverses matters. Start purl 2, knit 2, and continue through. The fourth row is the same. Then you start again at the first one. At the end of four rows you can see the pattern quite clearly and will be able to guard against any errors.

Tanja Osswald saw that I was truly confused by the above. Ms. Bloom is exactly right. I’ve corrected the patterns below. I think because I’ve been working things in the round I misread my own charts! 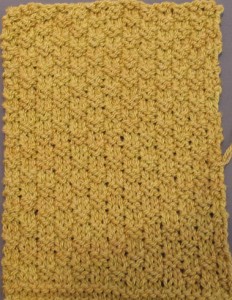 In the U.S. we usually like to balance the pattern, so I’ve also given you the pattern as it would be written with the extra stitches.

Ultimately, Double Seed is Seed stitch doubled, both horizontally and vertically. Except, it kind of depends on which reference tool you use.

Moss Stitch Clarification: How Does This Fit?

I wasn’t able to find any help in any of the British historical references. They don’t seem to use Seed stitch as a description. I had  assumed they would flip the names, so our Moss would become their Seed. But nope. 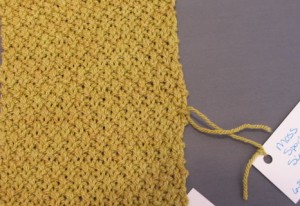 I looked in the Harmony Guides (now published by Interweave Press). Seed is Moss (as above). Double Moss is, well, not Double Seed above, but Moss as below.

According to Barbara G. Walker, to whom I turn whenever I need clarification, in her A Treasury of Knitting Patterns, Moss is a broken rib. Ms. Walker acknowledges that Double Seed should probably be called Double Moss as it too is a broken rib. The three stitch patterns are presented in this succession, which at least makes sense based on their pattern: Seed > Moss > Double Seed/Moss.

So Moss has each stitch repeated for two rows before it is switched.

I think this explains why there is such confusion about these three simple stitch patterns. I think you will have to memorize the difference. There isn’t something you missed!

Be sure to sign up for my Inside Scoop Newsletter to get great links, information, and to be sure you don’t miss anything.