When we first learn the knit 2 together (k2tog) it is just a method of making a stitch go away.  It is relatively easy to execute because it is done just like a knit stitch, but using two stitches.  Then you see it referred to as a right-leaning decrease, and if you stop to look at it, it does lean to the right!

What does that mean? If you have been using it wherever you wanted to decrease stitches, were you doing something wrong? And what is a left leaning decrease?

Except where we want to have paired single decreases–that lean toward each other–leaning right and left, we typically just do a k2tog, because it is easy.  Or, if something gets decreased only on one edge, it might not make a difference if you have a left or right leaning single decrease. And some knitters don’t care!

This single decrease is often paired with a k2tog, because it leans toward the left.

An SSK or slip, slip, knit is more difficult to execute, so it is used less often.  Here’s a great explanation of how to do it.

Take a look at the four methods of doing an SSK.  These are in order of my preference for doing them.

If you are using paired decreases, a k2tog and an SSK, how do you decide which side gets which single decrease?  A right leaning single decrease is usually done on the left side of a piece. Huh?

Think of your decreases as leaning toward the center.  Look at the slashes above as a pair:

So if you are working the side shaping or armhole shaping that makes total sense. When you are working a neckline, the opposite holds true. The k2tog is done on the right side of the neck, and the SSK is done on the left side of the neck.  \   / The decreases are now leaning to another center–or think of the original decreases at the armhole, and the pairing  and the shift make sense.

Want a really easy way to remember which single decrease to do?

Then when you divide for a neckline, the neckline edge becomes the end of the row.  So think of your paired single decreases as tipping their hats to each other, or bowing toward each other and you’ve got it. 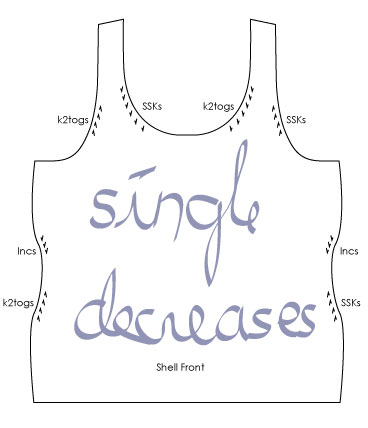 So What is An SKP?

An SKP or slip, knit, pass slip stitch over is a precursor to the SSK. Where the SSK has stitches knit together, the SKP has a stitch passed over.  This makes the SSK a better match for the k2tog.  Modern knitting patterns typically use SSK, but often in older lace patterns you will see the SKP. Mostly it is dependent on when the stitch pattern was written.

These are precursors to the SSK as well. I like to simplify the abbreviation to -b, but typically it is -tbl.  It used to be that the pairing was k2tog-b is knit 2 together through the back leg (loop) for a left leaning, and k2tog for a right leaning single decrease.

These are perfectly good single decreases, but neither is the single decrease I would choose to go with a k2tog. Look how they twist and wrap the stitch instead of laying on top. I worked the k2tog on the left side so you can compare.