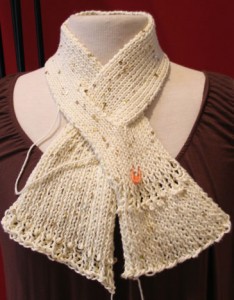 This is the scarf before blocking. The unraveled stitches came undone as i worked the scarf.

I finished my stop-gap scarf. I have a bit of yarn left, but no ideas on what to do with it, so I think I’ll put it aside for right now. I need to block the scarf and take pictures, but once again, I’m not sure what to do next knitting-wise.

I’ve got a swatch that I need to do, but it is so far on the front burner that I need to do it today at my desk. So what will I knit tonight?  I have been eyeballing some Linen from Claudia’s Handpainted yarn and I have a hat pattern I want to try it in, so I think I’ll swatch that tonight.  I have another yarn that I think I can do a sample in so that can move into the short-term queue.  I still haven’t had a chance to prioritize my knitting projects and I’ve been working on not starting anything new, so I am, slightly unraveled.

I finished a scarf for my mother (she’d knit most of it), then redid the button band.  But now it is done and blocked, and just needs buttons sewn on.  I knit the linen swatch, and have now also done one in wool and everything is blocked.

I’ve taken pictures of my scarf.  The pattern isn’t currently available.  I did it using this yarn.  It weighs in at 62g.  These are my observations: 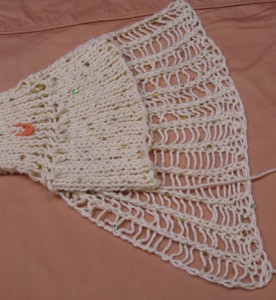 One end unraveled, the other not.

1.  I love working this stitch pattern.  The anticipation of dropping stitches delights me.  It is a perfect application for the flexible long-tail cast on.  1×1 rib is perfect knitting while watching dramas on TV.

3.   You cannot get the same exact look on a bind off that you can with the cast on.  I probably should have used an even larger needle than I did.

4.  When you want your stitches to unravel, you need to do it manually–they don’t run down by themselves!  If you drop a stitch–watch out, it might take off on its own. 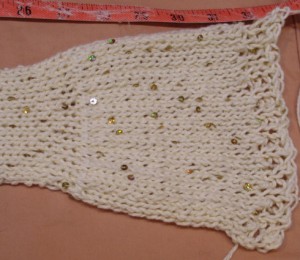 The bind off end. 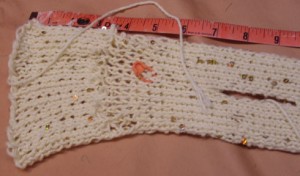 Cast on and buttonhole