I’m not sure I’ve ever mentioned that I was invited to become part of Cat Bordhi‘s Visionary Author’s group in 2012. I had applied once before, but was rejected because my idea was too similar to a member’s project. Cat, who is brilliant at assessing people, sensed that I would like this member, so put us in touch. My friendship with Jeane deCoster started there.

But in 2011 I was accepted for the 2012 retreat with a new idea. Off I went, with trepidation, for a 6-day “newbie” retreat at Lakedale Resort on San Juan Island.* An incredibly interesting group of aspiring fiber authors assembled and we all pitched our ideas and learned about self-publishing from Cat. I found some potential friends and a lot of new acquaintances. This was at the time I was starting Jill Wolcott Knits and it was good to begin making new connections. As often happens, pretty much you go home and not much more interaction happens. I roomed with one of my new friends at TNNA, but I admit I’m not the best at making friends, so I don’t always put out the energy I should. Plus, I was busy trying to get a new business off the ground.

Turned out my book idea was so good that two other books came out that handled the topic pretty well. This took the wind out of my sails a bit, but it also made me think more about what I want to say to knitters. I put it all on the back burner to hopefully cook into a new idea, but asked to be included in the 2013 retreat because I felt I needed support. I had no idea what I was going to do about my book.  I am always fairly confident that things will process through and I’ll come up with something, but I was pretty stumped at this point.  I did not ask to present about my book.  But once settled again at Lakedale, at Cat’s request, I agreed to at least give an update on where I was and where I might be going with my thoughts.  Always good to have to explain yourself. 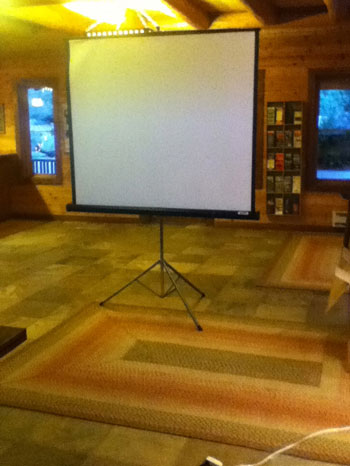 But this isn’t really about my book, which kind of became clear between arrival and my Saturday night presentation.  This is about connections and how I ended up interacting with multiple Visionary Authors in the course of two days last week.  Jeane and I have continued to become friends, and we agreed to share a cabin at Lakedale, and recruited Janine Bajus, who I meant to get to know better, but hadn’t.  The three of us had a blast together at the 2013 retreat, beginning for me when Janine picked me up at SeaTac airport and we drove to Anacortes together, with a side-trip to La Conner.

Thursday of this past week Janine came to my house to help me put together a secret knitting project.  We had a lovely afternoon together and she was able to do a layout for the project that was much better than what I had come up with.  We figured out how to proceed, worked on it a bit with Linda’s help, then adjourned.  Janine is also remodeling, so we had lots to share.

Friday morning I had a phone call with Jeane because I needed to run some concepts by her.  Jeane is honest and quite forthcoming in her opinions.  This is sometimes hard, but often just the slap you need to help find reality.  So, when I want a reality check, there is no one better than Jeane.  Jeane and I also needed to touch base on the first-ever-to-be-offered, Professional Development Class for Designers, we are teaching about sizing and grading, under the auspices of TNNA, at the show in Columbus in June.

And late Friday afternoon I had a lovely phone call with Sivia Harding.  Sivia and I made a kind of bashful acquaintance at Lakedale.  I was intimidated that my beading and lace knitting efforts would seem amateurish to her, and she was intimidated by my garment construction.  But we sensed a personal connection so we have tried to stay in touch with a Friday phone call once a month.  It was only later on on Friday I became struck by how lucky I am to have these connections!

But wait, I’m not done!  I have been asking Hunter Hammersen book questions too, so although we’ve only kept in touch online, I consider her among my new Visionary friends.  She is so clever and smart about things I have only the vaguest ideas about.  And super competent.  But also just a lovely and generous person.  So as I approach the launch of my first eBook, I am stalking her.  😉

After all that knitting world loveliness, to insure that I not get any ideas of being special, I spent my weekend doing laundry, ironing, lining shelves in the kitchen and attempting to unpack said kitchen. I made cookies for my mom and Mitch and a batch of agnioli sauce. More domestic goddess than knitting goddess.

*Cat is no longer holding Newbie retreats at this time.