Technicolor is the third collection I am part of with a small group of designers. There is a core number of us, and others fit it in as the concept and time works for them.

Typically after we decide to do a collection we pass around stitch patterns and then vote until we have the agreed-upon number selected. During that process I provide some concept, trend, color suggestions, which we winnow as a group. I do not think technicolor was based on my suggestions; it was a group decision to reflect what a lot of us did during the pandemic.

After Technicolor was decided upon, the next step was sourcing yarn. Jeane deCoster graciously provided yarn to us from Elemental Affects [the Cormo yarn line has been sold to North Bay Fibers], and Amanda Jarvis of LL Yarn Co also provided yarn. Malabrigo provides yarn to KnitEcoChic who cannot use the majority of yarns available to the rest of us. I sourced the yarn and cannot thank my yarn colleagues enough for making it possible and for having yarn colors that worked for all of us!

I always fit this project into the cracks and crevices of my schedule (not easy!) and Technicolor has been no exception. It can be stressful to get it done, and I try to use it to push myself in a direction I’m not certain about.

I got the yarn for Tulle and sent it off to my knitter in a very timely fashion. The pattern was written months ago, the sample knitted.

Then my saga really begins!

Tulle is a two-sided collar. It has Brique pattern on one side, and Lettres on the other. My pattern, as originally written, was 54 pages long. Lots of charts, stitch patterns with different row multiples and slightly different gauges. Diagonal buttonholes spanning four rows done in three segments, plus German short rows. Although not actually difficult to execute in knitting, it was a lot of pattern! I put the pattern aside, figuring that something would clarify itself to me, and I could whack the pattern into shape.

Of course I have been super busy, and literally nothing occurred to me on how to make the pattern work better. I poked at it a little bit, but nothing. Months passed.

With the deadline looming, I decided to just write up the Brique pattern, which was easier of the two sides with only one stitch pattern.

Once I committed to that course of action and I worked on just that part of the pattern, an easier approach occurred to me, so I rewrote and created new charts. That is the pattern that is in Technicolor: Matinee.

My apologies to my collaborators!

I love Lettres, so I will publish that in late January. As I redid charts, and rewrote the Brique Tulle, it became clear how I might condense the Lettres side, but time had run out.

It also became clear to me that for a pattern collection selling for $16 to $30 (or $3 to $5 per pattern), it didn’t make much sense to include the more complicated part of the pattern, even if it meant I was not sticking to the original plan.

I do all of my designing because I have goals for myself and things I want to explore. It is expensive in both time, energy, and hard costs. Reality bites.

Views of Lettres (the color is prettier than shown). Oh, and there was another button, but I stepped on it and it broke. 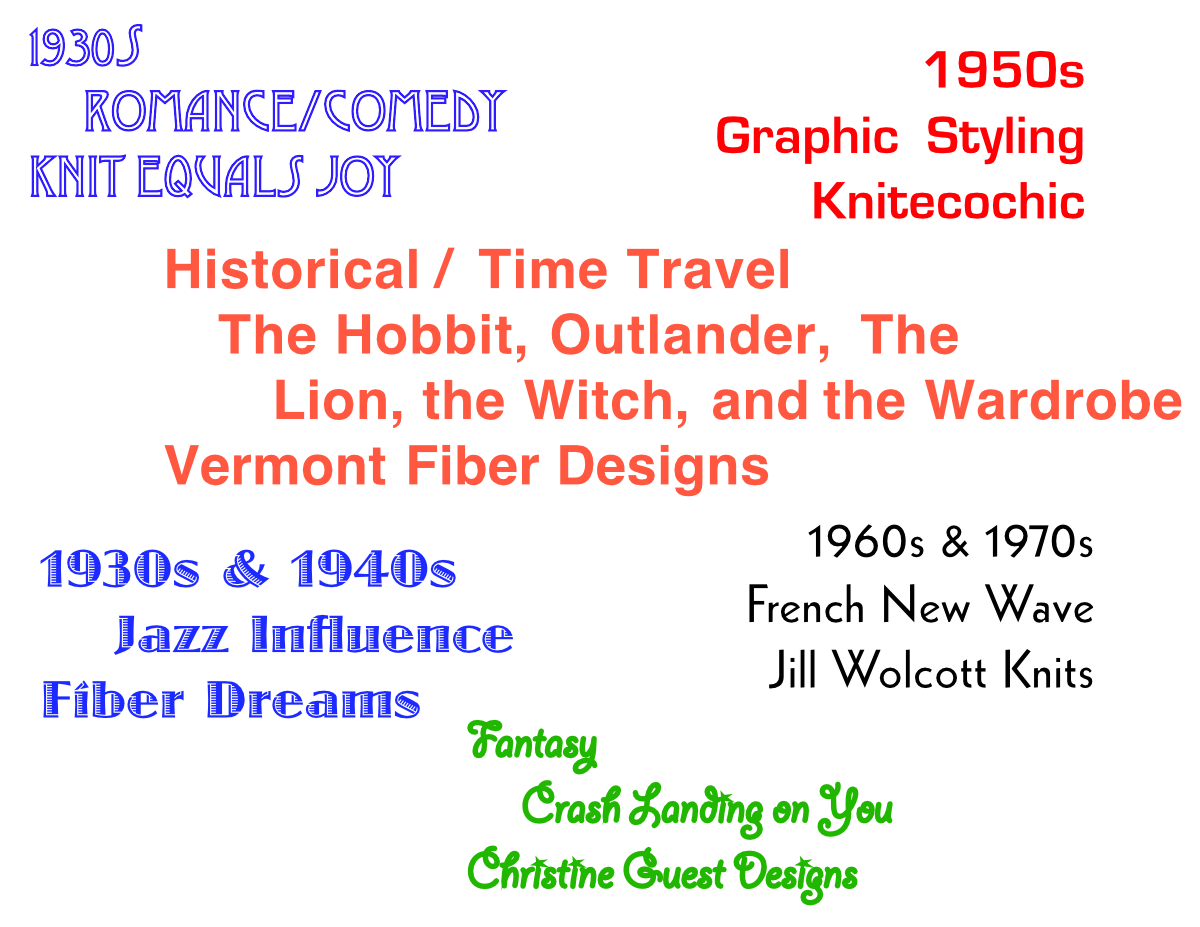 I love seeing how other designers work, what things challenge us (never what we expect), and how we right ourselves when our sails don’t push us where we thought they would.

I think all of us had our idea and movie concept pretty quickly. As a designer, ideas are the easy part! Getting yarn and colors was a bit more of a challenge. Malabrigo declined to provide yarn support for some of us (I totally get that we didn’t fit into their program), so I reached out to Amanda at LL Yarn and we each got what we needed. I love trying new yarn, so I challenged myself to use singles, as well as moody colors, which I don’t usually do.

Go here to read what KnitEcoChic published about each design based on a few questions to each of us.

We price the book to be a bargain. This is an opportunity to get work from six designers for a relatively low price. The price started at $16 and increased each week to be $30 when all six patterns were released. [Note, when you see these Collections, buy the first week at the lowest possible price!] KnitEcoChic and I typically price accessories at $8 or more (and the patterns will be available at their designer’s price point separately after the new year). 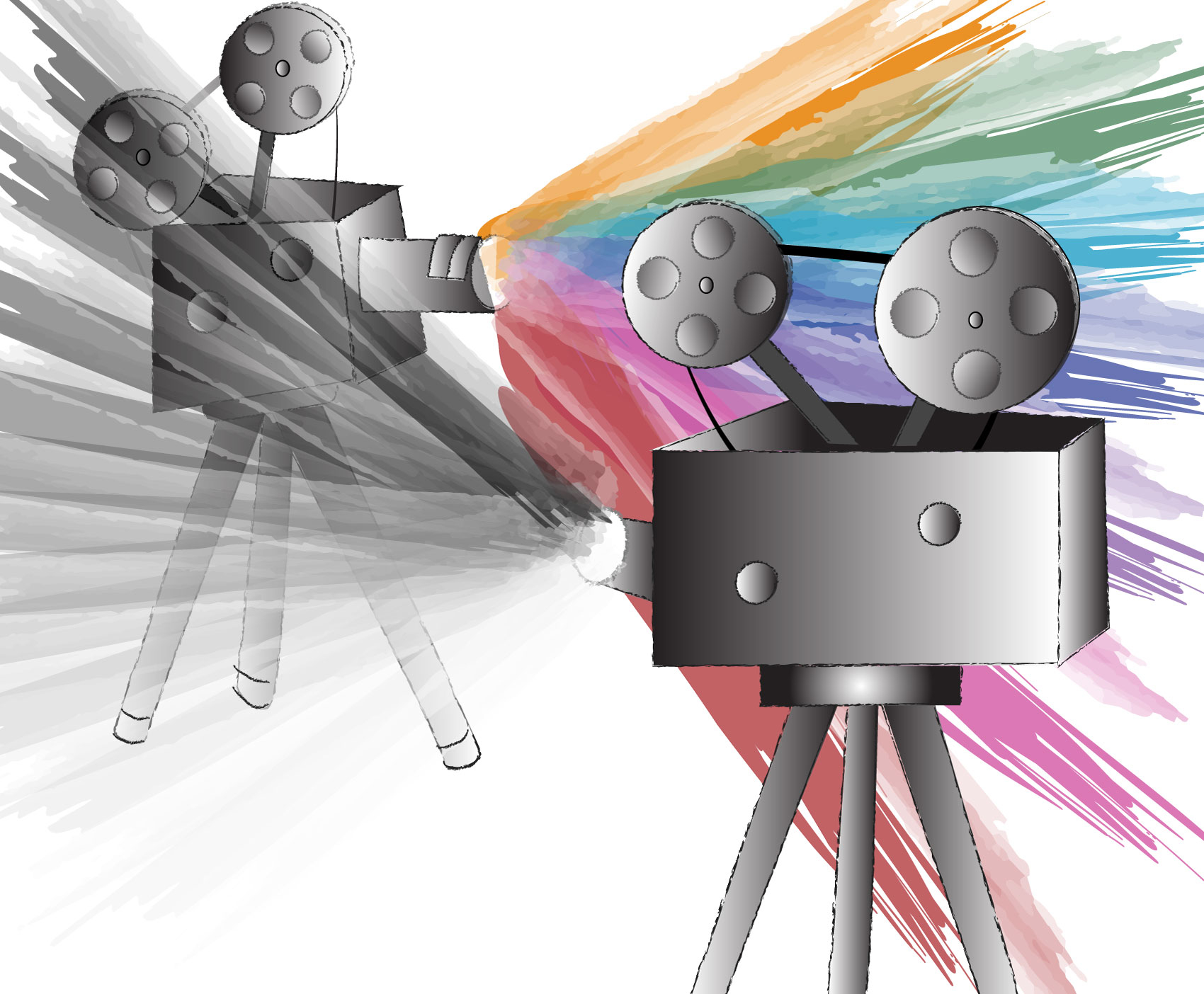