When Jill asked me to write up a guest blog post for her, we immediately knew what it would be about.  I had just finished reporting to her about my son’s 5th birthday earlier this week, and we knew it would be a good one to share with all of you. 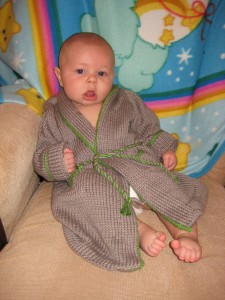 Way back in 2009 when my husband and I learned we were expecting our first kid, I immediately set to knitting all kinds of toys, garments, blankets, and accessories.  Through trial and error, I found what works for a baby (blankets and hats) and what doesn’t (it is surprisingly difficult to throw away a single baby bootie that you’ve made by hand, even when the other is lost somewhere in an airport you vaguely recall flying to).  And sure, for the first year or so of his life our son, Oskar, gurgled happily as we dressed him in those handknits.

But then, it happened—he began to develop opinions.  So far, as a parent, opinions are easily the most difficult part of parenting.  Suddenly, they won’t eat whatever you give them, wear whatever you put on them, play with what you want them to.  They start becoming their own little people, and as a result, my handknits were being met not with drooly smiles but thunderous expressions, and as he got older, vocal protestations. 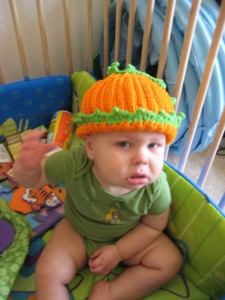 You can see the exact moment where he decides to stop putting up with my handiwork in this one.

So, for a few years, I didn’t knit for my son.  He hated hats, mitts, toys, blankets, scarves, anything that looked like it might possibly have even touched yarn.  I had given up even thinking about knitting for him, and instead concentrated on knitting for my husband and other family members, because as adults they at least know not to complain about “ANOTHER hat?!” out loud.

Imagine my surprise when, last winter in the depths of the polar vortex, Oskar watched my husband get ready to go outside and asked “Is that a scarf?”  My husband said that yes, it was, and additionally that Mom had knitted it for him, and isn’t that nice?  Oskar ran over to me on the couch, knitting away, and said those magic words: “Mom, can you knit me a scarf please?”

Internally, I was jumping for joy, but I played it cool because 4-year-olds are tough cookies who will immediately say no to anything they sense an adult is excited a 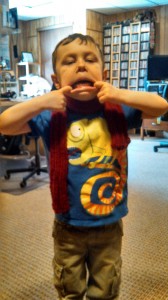 bout.  I let him pick out the yarn, and he spent the rest of the winter insisting on wearing that scarf every day.  Then he wanted a hat, and some mittens, and all of a sudden I was the happy parent of a kid who actively desired handknits.

As his 5th birthday approached, I asked him what he wanted, and he insisted on a knitted shark—he had seen my copy of Chris de Longpré’s 52 Timeless Toys to Knit, and the shark was the one that jumped out at him.  I spent the last few weeks working on it in the evenings after he went to bed, and when he woke up on the morning of his birthday, I went into his room and asked, “Would you like your birthday present now, or later?”

Of course, he said “Nownownownow please!” so I triumphantly presented him with that knitted shark, and to my surprise, he loved it.  He hugged it, and swung it around, and introduced it to his other stuffed animals, and bit everyone with it, and proudly proclaimed that its name was now “Sharky.”  And I thought, how lucky am I to have the kind of kid who’s happy with a knitted toy as his birthday present?   Even when he got some gifts later that day, none of them elicited the reaction that Sharky received. 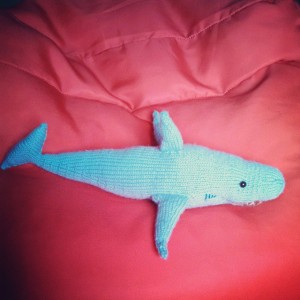 The point of this is: I don’t think Oskar is particularly unusual in this regard.  I think quite a lot of kids, if they were honest with you, would tell you that something made special, something just for them, in their favorite colors, in a soft yarn, would mean the world to them.  The key is to engage them in the process.  Show them patterns, show them your yarn, show them how you make stitches, show them how to sew things together—and even if doesn’t inspire them to pick up the needles (I’m not that optimistic), it will demonstrate the very uniqueness of a handknit, and they’ll be proud of the fact that no one else has an item just like theirs, whether it’s a toy, or a hat, or a blanket.

Take Sharky, for instance: there will never be another Sharky made with the particular combination of yarn (Nashua Handknits’ Creative Focus and Zealana’s Kauri Worsted, plus bits of Knit Picks’ Palette), with that amount of stuffing, with those fins sewn in that precise place, with that maybe too orange mouth, with those slightly wonky embroidery details.  That’s something that can draw in any kid: they are special, and their handknit is special, too.

We’re expecting our second child in January, and I’ve already made a couple of pieces for the baby.  I’m planning on casting on some pieces of the Natural Baby Collection too (we’re having a surprise, so I’m thinking the NBC Hat Trio, the NBC Hoodie, and the NBC Onesie), and Oskar’s already agreed to help me pick out the yarn.  I’m prepared for those toddler years when the next kid will hate the idea of my handknits, but at least this time, I have an idea of how to talk them around.

And in the meantime, I have ill-fitting sweaters to make for my husband. 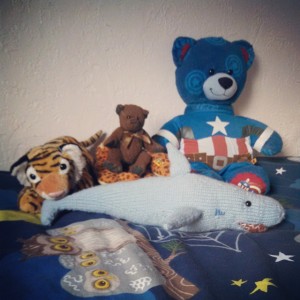 Jill will be back to her regular posting schedule next week.