The Timeless Toys KAL at the Heritage has netted a Penguin. We gathered at the Heritage yesterday for another knitting Monday during which Stella was the first to complete a Timeless Toys KAL project. Not everyone is participating in making toys, and progress is sometimes slow, but Stella is an accomplished knitter (and crafter) who is very focused on her goals.  Not surprisingly, she completed her Penguin from 52 Timeless Toys to Knit by Chris deLongpre. 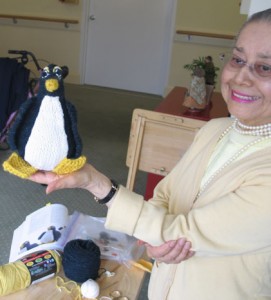 Not surprisingly she got a little stumped on some of the finishing.  When I arrived shortly after 2 pm for the Timeless Toys KAL the penguin was complete except for the face.  Stella and I pored over the finishing instructions, and the photos and discussed how to proceed. I sewed on the beak, but handed it off for the French Knot eyeballs. Stella’s first try at the white around the knot was a little awkward, so she took it out and I studied the photo again, then did smaller stitches. She tried the eyebrows; we discussed, looked at the photo again, and I determined a plan, which I executed. Stella took care of the ends and then showed her handiwork. 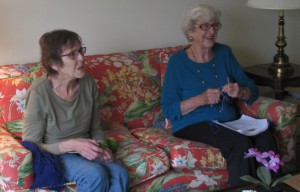 Carm (right) recommenced working on the Blue Tang and Kay worked on her Turtle bottom, their Timeless Toys KAL projects.  Both are learning new knitting techniques, which is admirable. I think SSK is the hardest for everyone to understand, and we determined that they were all familiar with or understood the k2tog-b or k2tog-through-the-back-leg and would probably do that instead. Jane (right, below) is working on a hat on circular needles. I think juggling the dpns is a little much for her hands. Ida works on garter-stitch scarves made in yarn with flecks and color variations mostly knit while she watches baseball, so she prefers the simplicity of garter stitch. The scarves remind me of the watercolors she does. 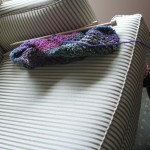 Doris came for a little while, but when she realized I did not have more yarn for her elephant, chose to spend the afternoon somewhere a little less stuffy. Gloria and Jan worked on other projects as well. I knit on my Windsor Capelette in Carnal from Vice Yarns. 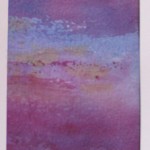 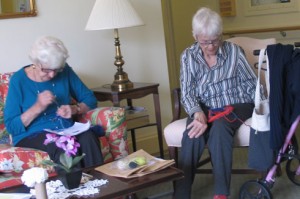 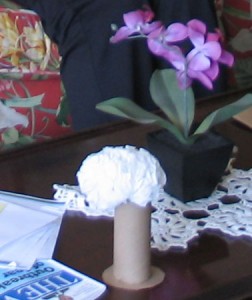 Although not uninitiated to electronics and all the digital world has to offer, they kick it old school near the end and have tea and cookies along with some savory chips. Jan and Gloria make tea and serve it in lovely tea cups on gold and white plates. My gingersnaps are part of the cookie assortment and we discussed how I found the recipe and whether or not I would ever make the cheesecake the recipe came from. Jan thinks I should. The ambiance of the sitting room was enhanced by carnations made with toilet paper from a lesson Stella had given the previous week.  She indicated she loves crafting of all sorts and particularly likes watching children’s crafting shows on TV.