Today Mitch caught me employing an unorthodox approach to wet blocking. I put a swatch I’ve been working on into a bath this morning, and then moved on to working on projects in my office. A while later (the water was still warm-ish), Mitch commented that he didn’t think he’d ever seen the needles go into the bath with the knitting before. I had to admit it was not my usual method. Since I am not finished with the post I intended to put up today, I decided it might be fun to call myself out on some things I have been known to do. 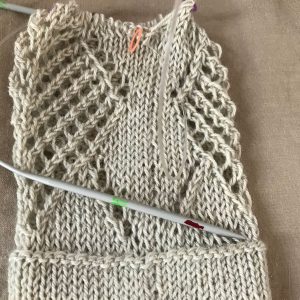 It is merely unorthodox. Mitch asked why. I admit I was a little surprised that he has been observing my wet-blocking process.

This is a swatch done in the round. It is actually the beginning of a sleeve. For reasons that I do not fully comprehend, I am struggling with working from charts the past few days, so I got to a point where I really want to get my gauge numbers and I am feeling completely impatient with myself. Normally I would take my swatch off onto waste yarn, which is what I should have done, but I just didn’t feel like it.  I started this swatch days ago and I’m moving through molasses. I need my gauge numbers!

I am using old Inox needles.  Really old.  Pre-turbo needles.  They have a nice point, and weren’t in a project when I was looking for US size 6(4mm) needles, and were long enough to use in the magic loop.  I wouldn’t do this to my Addis or other good needles. So I let myself take a short cut.  Sue me.  Anyway, Mitch was delighted to call me out on an unorthodox approach, but not all that interested in my reasoning. Really? You don’t want to see how the needles are different?

An Unorthodox Approach Needs to be Calculated! 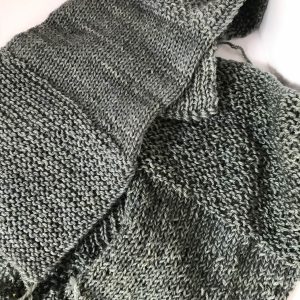 In the past few months, I’ve made the mistake a couple of times of not taking my unblocked gauge before blocking. This is not only an unorthodox approach, it isn’t good. It is part of my whole process to know what my unblocked gauge is. I have a process for recording pre-blocked and blocked information and I keep records on every swatch I make.  It isn’t a deal breaker to not have unblocked gauge, but I forgot on one of my Anzula swatches, and had to knit a second swatch, so that impatience to block cost me a couple of nights of knitting.

Knitting All the Yarn

I recently made a pre-sample shawlette in Ultimate Suri from LGF Suris.  This is a one-skein project, but I took it a little literally, and actually knit all the yarn.  When you use up all the yarn it means I do not have yarn to make a WPI card and I don’t have a swatch.  I used ALL the yarn.  Fortunately I am having the real sample knit, and we made allowance to have some left over.  My desire to end up with little extra sometimes makes things interesting. 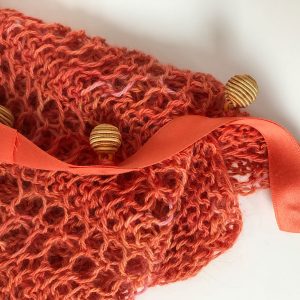 I carefully measured the length of the pre-sample shawlette front so I could purchase the right amount of ribbon for my closure.  I will typically buy extra, but the amount of excess stuff I have is causing me to be overly conservative.  I bought half a yard, which should have been plenty of ribbon—had I measured correctly.  I used the wrong end of the ruler and recorded the wrong number.  When I sewed my buttons to the ribbon, I had 2″ less than I actually needed.  Fortunately I measured again before I sewed the buttons, and I was able to make a temporary closure, but now I have to take those off and do it again.  I bought extra the second time.

I have a sticky note floating around my desk that says 68g on it.  I remember writing it down, but not only did I fail to note which yarn it might have referenced, but I have now completely forgotten which yarn I had weighed.  Do I throw it away or keep it?