Unpacking and packing are the reasons it is hard for any of us to move. Everyone has asked me for weeks if I was excited about moving. I would always respond that I was looking forward to it, but I wasn’t really excited. The reality of what goes into packing and then subsequently unpacking is too daunting for me to feel excited. The last couple of times we moved there was a major lag between totally unpacking and the packing, so this is the first time I’ve done such a massive shift in one fell swoop!

Unpacking a Life, I

Like nearly everyone, it is at the unpacking stage that you realize what exactly goes into putting a life together. There is his stuff, my stuff, and our stuff. Right now, there is too much of it. Day before yesterday Mitch had the idea of renting a parking space in the apartments across the street. I got my pick of eight spots and I rented through the end of August to give us a little breathing room, but not too much. 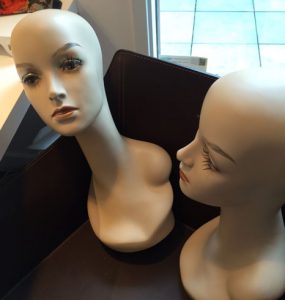 The movers arrived a little later than planned, and worked pretty steadily for seven hours. They had two U-Haul trucks of stuff, and about mid-afternoon I thought that we would never see the back end of the second truck. But my job was pretty easy. I checked off numbers as things were unloaded, and told them where to take things. They did a pretty good job of getting stuff to the right place, but there was definitely confusion between what was my studio and what was Mitch’s office. Confusion compounded by the fact that Mitch was sitting in my office part of the time because he needed to do client calls and his office doesn’t have a door.

Mitch probably has more stuff than I do, but I also do most of the household unpacking, including the kitchen, because I am the only cook. Fortunately I think I have a touch more, or at least even space here. Not so in other parts of the house. The living and dining rooms are different, but fit our things well; closet space is at a premium (we’ve already negotiated). 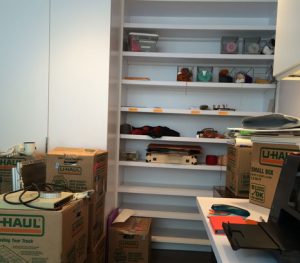 I’ve unpacked eight boxes in my studio today, and positioned my one filing cabinet (down from three!). As often happens, I think I am going to reposition it because what I had in mind is not quite so good in real life. One of the boxes was Mitch’s stuff, but I unpacked it so I could get it out of my office, and make it easier for him to figure out what to do with the contents.

I was not as judicious about what I moved as I should have been. Now I have to reconsider everything at this end. I am hopeful that there is a lot of stuff I can part with in my other boxes! I left some boxes in the garage because I knew it was just too full in my studio. I have found one that I can swap out for something more relevant. 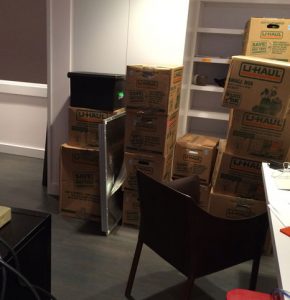 Then there are things like my heads. What do you do with them when you are short of space? I pictured the above the cabinets above my desk, but they are slightly too tall. Back to the drawing board on that one.

As we were at the tail end of the unloading Thursday our neighbor came over and asked if we would object to a friend of theirs snagging the king-size bed that we had put out to be picked up by the City. To me this is a win because it means a barely used bed it going to someone who needs it and not to a landfill. 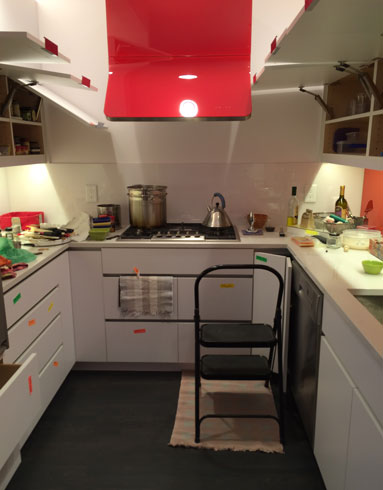 Looking ahead over the weekend, there is going to be a lot of unpacking and not much else. Well, of course martinis, brunch with friends on Sunday, and getting rid of boxes and paper. I am switching between areas in order to keep myself from getting too much in the weeds, but there are a lot of shelves to line. Jeez I hate lining shelves! Can’t wait for the new stuff to arrive which is perforated! I am, of course, re-using as much as I can because it is plastic and I don’t want to throw it away. Some things never change.