Vice Yarn put out a plea a couple of weeks ago on Facebook (probably other places too, but I w 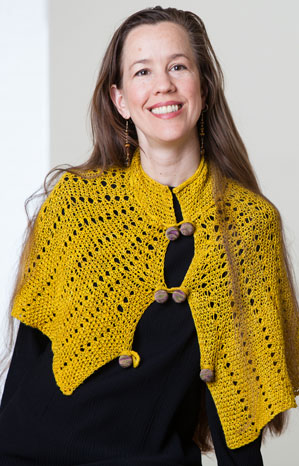 asn’t looking at them) seeking someone to knit a sample for her fall trunk shows. I’m not available to knit samples, but I’d been talking to Lizzy Inman about doing a real sample of a capelette that I did for myself from a skein of yarn she gave to me.

The only thing standing in my way of making this project a Jill Wolcott Knits pattern was focusing and finding time to write the pattern up. So six months later, when I saw that plea I messaged Lizzy to see if she’d like a sample of my capelette for the trunk shows. And she and I had a short conversation and she said she’d send me yarn. Things are busy at Vice Yarn too, so it took her a little time to get it dyed and mailed to me, but it arrived on Wednesday this week. I was too busy to even stop and admire it, except to love the selection of colors that she’d sent to me.  Or to really appreciate that she’d sent me seven–that’s 7–skeins of this luscious stuff.

After we’d confirmed details and Vice Yarn had committed to send me yarn, it did seem appropriate that I should finally get serious about this project. In all honesty, although I had started another version of this project, it was something I tended to pick up when I was watching something on TV that I needed to pay attention to–you know, Project Runway, Downton Abbey, The Bridge–or when I was imbibing a martini, which dulls my focus. Yes, it is that easy to knit. And stunning! But I had never accurately recording what I was doing. I did name it. Windsor. 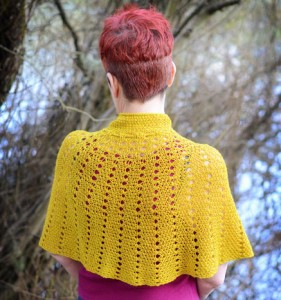 If I’m being honest, I actually have more than one prototype going.

I had finally gotten to writing out the pattern last week–and I worked out some kinks that I’d just worked around until I realized I was going to have to create a pattern. I’m a little different about yarn. I don’t like having things that I am not going to use or that are going to make me feel badly that I’m not using them as quickly as I should. So when I asked for yarn, I had to leap into action on the pattern.  So now the pattern is written. Yarn has been put on needles, and I’m going to knock out this sample. Then I want one for myself. I know that one of the colors I received is called Trollope (that’s the one I want), and Wendy claimed a Chartreuse.  Sample will be in the stunning Red. I think Linda will want one. How’s your counting? I think I still have yarn left.  Hmmmmmmmm.

ETA:  I changed Shawlette to Capelette so conform to Ravelry’s classifications.  Fasteners make it a cape/capelette.