Why go high? My mother’s best survival skill is to “rise above it” and it has served her so well. It is, undoubtedly, the thing that makes me the craziest about her. I get it. I completely appreciate why it is such an awesome tactic. It just doesn’t fit me well. You know I’m all about fit. Ha ha.

I’m going to be knitting some hats for the Women’s March on Washington, DC. I’m not going to the march; I have a commitment elsewhere, but honestly, I’m not inclined to do it anyway. I do knit hats though, so that fits really well. My newsletter yesterday had a recipe for the hat I knit over the holiday weekend (I knit three–but they all used the same recipe).

I was surprised at how disappointed I was in the election.  Hillary was not my idea of a great candidate, but the idea of a woman in the White House felt really right.  Everything leading up to the election did not prepare me for result. I am somewhat frightened about the next four years. I’m not sure that just reading the New York Times or watching The Daily Show, Samantha Bee, and John Oliver, are going to be enough.  See, I’ve not said anything negative yet.  I can go high! 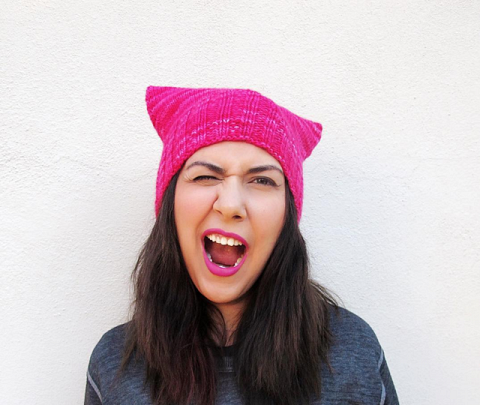 I think we can all go high by making the next four years years of action. It is going to be hard because we will no longer have the number of supportive elected officials in Washington, DC, but let’s make our voices heard.  We have mostly been quiet for too long and we have waited for others to speak for us.  We have patiently waited for others to give us what we deserve and have already earned.  Clearly that won’t happen unless we step up. I want to be part of that forward progress.  Right now I can knit hats.

If you want to go high in a hat, the link provides an in-the-round variation of the Pussy Power Hat.   go-high-hat-recipe.