I always say work in ends. I like to keep it open and weave in ends seems to tell you to weave the ends in.  I’m not sure why I make such distinctions, but I do. There are always at least two ends to work in, so it is not something that you can ever get away from.

I believe each method of working in ends is situational:  Type of knitting, yarn, where the end is. So different methods may be needed in a single piece to get rid of yarn ends.  Weave in ends always makes me think of weaving the end in when adding a new yarn.  More on doing that later.  Let’s start with flat knitting.

Work in Ends: Cast on and Bind Off

The cast on tail can usually be worked into the cast on itself, but I like to work it up away from the edge to keep it from poking out later.  Sometimes that isn’t possible, so I weave it  back on itself. to make a hook to hold it in place.  It is great to split the yarn with the yarn to really anchor it.  Have the tail end going away from the cast on or bind off.  Not only do you want to hide the end, but you don’t want it popping out and showing.

I’ve taken photos of working in the cast on tail, using a green wool yarn on cotton.  The first photos show the end worked into just the cast on. 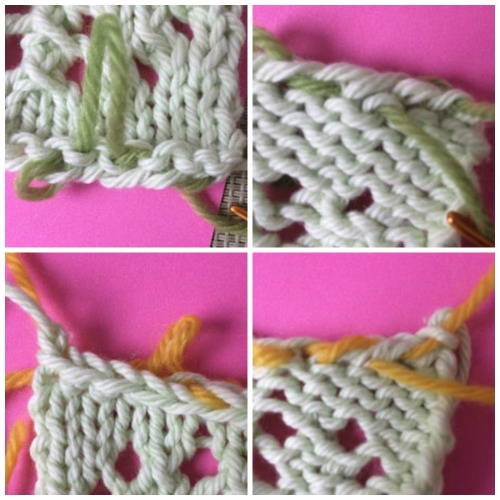 I’ve taken photos of working in the bind off tail using yellow wool yarn on cotton.  The first photos show the end worked into just the bind off.

The second set of photos shows working the end into the backs of the stitches.  I have either gone under or split the yarn of the purl bumps on the wrong side.  My goal in this situation was to get to a decrease—where it is easier to hide a end because of the stacked stitches. 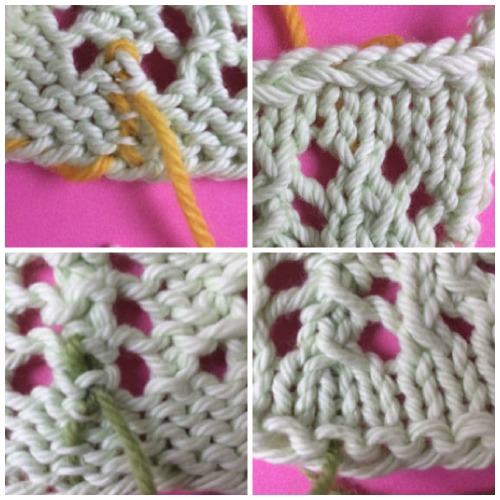 Anchoring in cotton usually needs to be a little more secure than in wool.  The last set of photos shows the right side of the fabric.

So no more excuses.  Work those ends in!